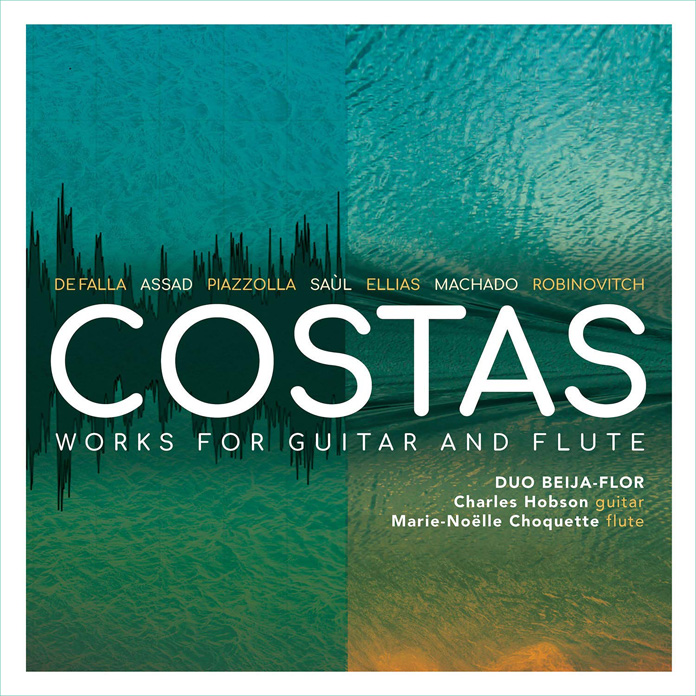 The guitar and flute is more likely to co-exist in a chamber ensemble than a symphonic orchestral context and in both one is often almost oblivious of their relationship because music hardly ever brings the timbre of their instruments together. So Duo Beija-Flor – with guitarist Charles Hobson and Marie-Noelle Choquëtte – is quite a rarity. The repertoire on Costas – Works for Guitar and Flute makes this Montréal duo a must to listen to for the aficionado of great music. The virtuoso mastery of the instruments locked together in an interminable dance of music, the notes of which seem to leap off the page and dally in the rarefied atmosphere of the listening room, or dance and gambol in a mad rush of excitement (depending on what work is being played)… all of this makes the naked beauty of this recording absolutely spectacular.

One is not likely to miss – even at first glance – the highly intelligent manner in which the repertoire has been chosen. De Falla, Assad, Machado, Saùl, Ellias and Robinovitch. Nothing is here but for the greater glory of music – in this case the guitar-flute duet performance. As melodies unravel, each aflutter with diaphanous splendor, a moving feast of music unfolds as imagery and emotions melt into one another from one song – or section of the song – to the next. The “Siete Cancioñes” of Manuel de Falla set the tone for the record with their plethora of emotions being unveiled by the lissome phrases of Marie-Noelle Choquëtte’s flute and Charles Hobson’s guitar. The duo plays the music unwrapping each statuesque melody as if revealing some delightful mystery for the listener to grasp with their ears with great expectation.

There’s a wholly natural feeling to the way the climaxes and sudden changes of tempi, mood and direction of “Siete Cancioñes” are so perfectly judged in this performance. This is a measure of how well guitarist and flutist know the work(s). From the perfumed heaviness of the opening song to the rapturous (guitar and flute) arabesques of the last song, a richly mysterious mood is beautifully sustained. Sergio Assad’s music “Garden Suite” is perfectly awash with water colours and thus completely in tune with the Japanese film for which the music was created. Duo Beija-Flor plays this work with an intensely theatrical feel and is able to do justice to the passionate outpourings of emotion with a rare perfection.

In the works by Celso Machado both guitarist and flutist prove to be absolute masters of Brasilian repertoire of the modern era and their sparkling account of both works is impeccable. The rhythmic buoyancy and contrapuntal vigour of these great works are always to the fore. Likewise Beija-Flor has shown that they are subsumed by the Portuguese “fados” which they have expertly arranged for this disc. The sparkling effervescence of Roddy Ellias’ Cuban comparsa “Havana Street Parade” is breathtaking in the burnished tone of the flute as well as the thrilling virtuosity of the guitar. And just as Miss Choquëtte brings all of the momentum and inner drama of the flute to the fore with absolute refinement, so also does Mr Hobson deploy the full grandeur of his instrument , with the range of harmonics from pizzicato to technique exotica such as “nut-side sizzle”, “nail-sizzle” and “bi-tone tapping” – plus a battery of percussion possibilities. And all of this magic is carried through right unto the “Four Sephardic Songs” of Sid Robinovitch right at the end of this glorious disc.