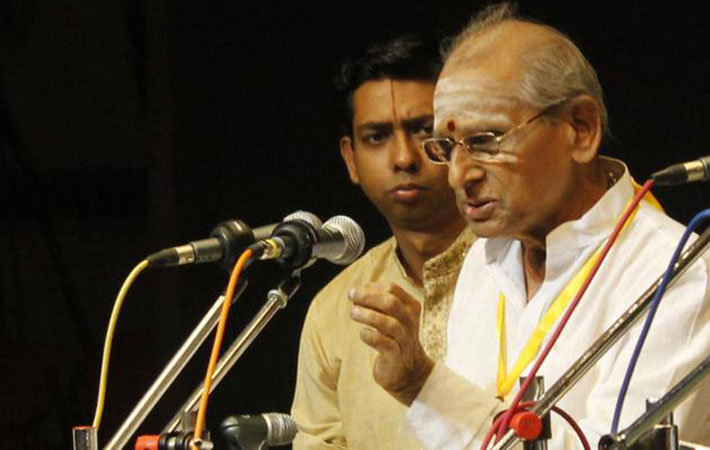 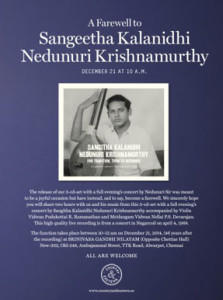 Stories of Kalanidhi Nedunuri Krishnamurthy’s are the stuff of legends. The reason for some of this can be heard on this three-CD set that captures the fabled four-hour concert. His vocalastics are unmatched as he uses the equivalent of colouratura to soar and swoop as he sang the sing varnams, Ashtapathis and Tarangams. One of these is informed by a charming incident in which Lalgudi Jayaraman, accompanying him on the violin, refused to respond with his own violin alapana after Nedunuri Krishnamurthy had sung a soulful and imaginative Kapi alapana. After the concert, when Nedunuri asked him the reason for his refusal to play Kapi alapana, Lalgudi astounded him by saying, “Nedunuri Sir, what is left for me to respond after you had exhausted all the possible manodharma in your own alapana? It is impossible for me to give any comparable response.” Not only that, he called the Sabha secretary and told him that Nedunuri was truly a great musician. 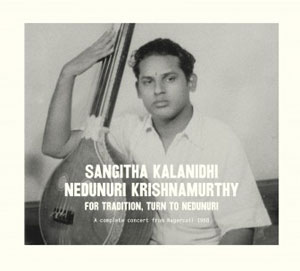 The performance from Nagarcoil is fiery. It is cast in the forges of Tamil Nadu where strength and sinewy beauty of vocal forms was celebrated with looping melismas that are heard here as ascend the scales of Carnatic ragam. Here Kalanidhi Nedunuri incorporates raga alapana, tanam, niraval and kalpanaswara. In more elaborate ragam tanam pallavis, a tani avartanam follows. Today, most concerts by prominent Carnatic vocalists include a ragam thanam pallavi (RTP). Sometimes it is simply restricted to an alapana of one ragam, followed by thanam, pallavi and finishing with kalpana swaras in the same ragam. However, here is evidence of the artist to rendering their alapana, thanam and pallavi in ragam 1, start the kalpanaswaram in ragam 1 and then moving on and sing only the kalpanaswaras and the pallavi in two to three other ragams. While the artist has spent much time on these ragam he has also ensured that he has only devoted about 4-5 minutes to each subsequent ragam. This complete grasp of RTP requires not only experience but formidable amount of planning. First and foremost is the sequence of the ragams– while the audience may not expect a logical order, the critics surely will. Secondly, since this part of the concert is likely to last anywhere between 40 and 60 minutes (this one lasts some 240 minutes), the performer picks his ragams very carefully. Last but not least, the accompanying violinist Pudukottai R. Ramanathan, violin (in the case of this recording) is able to render each of these ragams as well. This recording will be famous for the fact that much of this tradition has been preserved for future generations of vocalists and disciples to learn from. Bravo Bengt Berger and bravo Country & Eastern for bringing this concert to fruition.

Born to late Sri Rama Murthy Pantulu of the Pithapuram Estate Office and Smt. Vijayalakshmi on 10th October 1927 at Kothapalli, Pithapuram Taluk, Andhra Pradesh, INDIA. Sri Krishnamurthy bears deep musical heredity through his mother and maternal uncle. Sri Krishnamurthy joined the Maharajah’s Music College at Vizianagaram in the year 1940 and received his initial training in Violin and Vocal from the Late Sri Dwaram Narasinga Rao Naidu and has started giving Vocal Music performances since 1945. In 1949 he came under the influence of great master SANGITA KALANIDHI – PADMABHUSHAN Dr. Sripada Pinakapani. Under his guidance formed a style of his own, followed by many. Sri Nedunuri is a ‘TOP RANK’ artiste in the A.I.R. and has been performing in the Madras Music Academy for more than five decades continuously, since 1951. Nedunuri is well known as one of the front rank artiste all over India and abroad. Read more…