There is no such thing as fusion in music. If that really happened it would certainly degrade the traditions that the music was aiming to draw from. Musicians from Beethoven and Bartok, Stravinsky and Stockhausen knew that. As do musicians through the ages from then to now. Sergio Pererê, Marcus Viana and Zal Sissokho certainly know this. But when cultures collide in the right environment it’s like triggering off a fission reaction except that the elements remain intact, only something else can be produced that is majestic, dramatic and wholly new. And this is exactly what has happened in the explosive unity of these three musicians. And there is something else, perhaps hidden from view: a re-anointing of the African origin of a soulful polyrhythmic sound-world that has energised most musical forms today. 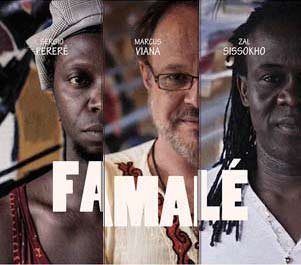 These three musicians, Sergio Pererê, Marcus Viana and Zal Sissokho are sublime risk-takers and in the ultimate analysis far more dramatic and expressive. While Marcus Viana brings a Brasilian sensibility to his violin, the other two musicians are immersed in the traditions of their African roots. Zal Sissokho is unique in that he is a Mandingo griot. His music comes from generations of Mandingo peoples and he sings in both Malinke and Wolof languages, which makes him altogether unique. This recording does well to shine a spotlight on this ingenious musician, seeing as he is not only steeped in his family traditions but also stretches them to incorporate a considerable degree of improvisation on his instrument – the kora.

Once this recording has been given careful consideration by the cognoscenti and by regular listeners alike, it will be seen to have caused a silent revolution in contemporary music with its simple harmonies, overtly melodic appeal and general absence of obvious complexity. Unlike many a disc, however, one does not have to wait for the very last piece on the recording to be done for anyone to recognise the significance and success of this unique partnership. It becomes evident quite early on in the proceedings – from the second track, the powerful “Yalla” as a matter of fact. And by the time the last track on the album arrives the large canvas on which the music appears begins to be seen for what it really is: an artistic endeavour of considerable inspiration.

The music is enigmatic and we are regularly reminded of this by the tintinnabulation of Zal Sissokho’s kora and the unfettered soaring of Marcus Viana’s violins. Every so often Sergio Pererê joins in on cavaquinho. The other aspect of the record is that it features music sung in Portuguese, French, Malinke and Wolof. And while language is important because it conveys meaning, it isn’t the sole vehicle of communication in music. That artistic honor belongs to melody, colluding with harmony and the rustling of polyrhythms, which when it melts, one into the other brings something spectacular to life for us to enjoy. Famalé is that kind of recording. The endless enchantment and delight of its music singles it out for a disc that is listened to not just for its importance, but for the sheer enjoyment of its music.