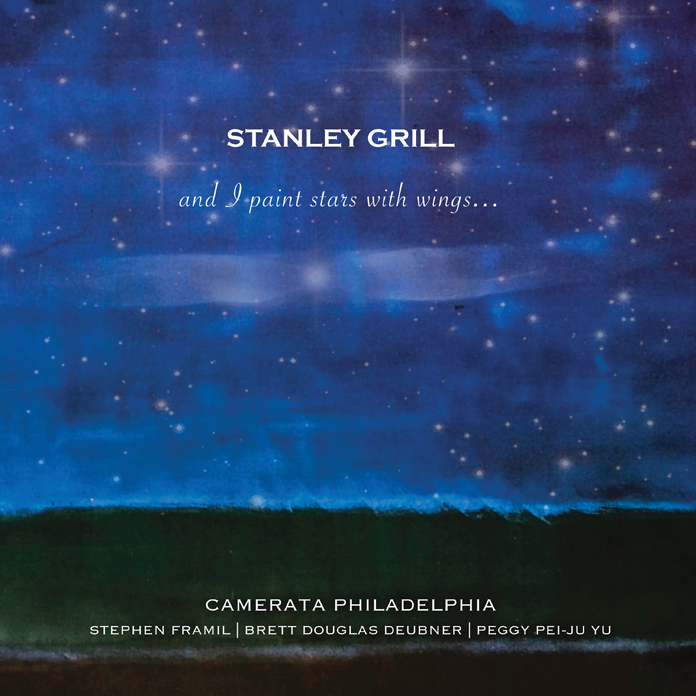 In 2017 Stanley Grill wrote music that elevated the terrestrial to the celestial with At the Center of All Things. That music swept across Whitman’s America (and Mr Grill’s) and the Bohemian landscape of Rilke. This endeavor has now been followed up with one in which the composer – Mr Grill – turns his gaze heavenward. But his heaven is also a metaphor that has been held close to the human heart for generations – even ages since man began to grapple with his own existence in the universe. Naturally Mr Grill does likewise – that is, in this music he turns his thoughts, first, to the elements, then to a more utopian view of our world.

Having done that Mr Grill embarks on the more meditative part of his music journey which he examines things from a Kantian perspective. This finally leads to a launching, if you will, into the deeper meditative states that examine religious experiences during alternate states of being. This last part of the recording contains music that is inspired by the poems of Fernando Rielo.

Make no mistake this music is deep. At an ontological level it examines the very nature of being. Significantly, when the greatest minds of civilisations – from the Buddha, Confucius and Averroes, to Aristotle and Plato, Kant and Nietzsche – have delved into the nature of humanity, they have almost always turned their inner eye – and indeed the full weight of the intellect – towards the heavens. We are, after all, a product of the same energy that exists in the heavens; among the stars. This is where Mr Grill seems to seek his inspiration for this music. In fact, his music comes from that rarefied realm.

Mr Grill’s gifts are put to a severe test right out of the gate – in his work, “The Four Seasons”. This is a magnificent chamber piece and a bravura piece for Brett Douglas Deubner’s viola. The work is a superb musical painting in which Mr Grill grapples with the nebulous and the concrete. The imagination with which Mr Grill manipulates rhythm and timbre to achieve the desired effect for each of the four elements is crucial to the success of the piece. The rugged descriptions of Earth to the bouncy alternation of eight and sixteenth notes that follow through Air and Water to the roar of the final Fire movement are played with graceful virtuosity by the soloist as well as by the tightly-knitted ensemble which, in turn, plays with impressive tone and colour.

The meditation in the form of a pavanne which seeks to imagine a world at peace is a superb tone poem that unfolds from darkness-to-light. Its stately tempo and opulent texture makes the formal architecture of the work quite gorgeous; a kaleidoscopic work with a miniature with a symphonic halo. “In Praise of Reason” is a shimmering work, a terrestrial parturition experienced in the stately Adagio, Moderato that turns into a celestial contemplation with its brisk Allegro. The recording ends with a longish vocal work set to poems by the Spanish Catholic mystic and poet, Fernando Rielo. Mr Grill’s creates songs around four poems strung together with breathtaking Intermezzos. Peggy Pei-Ju Yu delivers the recitatives in a gloriously lustrous soprano and Mr Douglas Deubner returns to solo with equal radiance.

As with his other works Mr Grill puts his profound stamp on music that celebrates heaven and earth. The results are transcendent music presented in a recording with considerable power and warmth eminently suited to Mr Grill’s ascendant music.