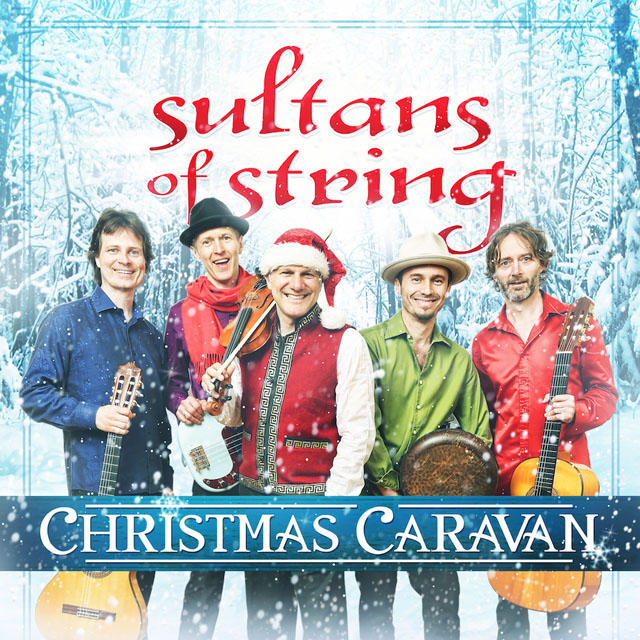 To the extent that the feast of Christmas is universally celebrated it would make eminent sense to create a soundtrack for the season – and the day, itself – that would be as universal as the celebration itself. However, one is hard-pressed to recall anything quite like Christmas Caravan by Canada’s iconic ensemble the Sultans of String. Not only does the disc contain work that seems to traverse the musical topography of Africa, Europe, the Middle East and – in a quite remarkable twist – an unveiling of an indigenous Huron Carol exquisitely sung by Crystal Shawanda but throughout its extent the disc features lush arrangements and a seemingly endless constellation of stars engaged in a performance of ravishing beauty. Clearly the Sultans of String have pulled out all the stops on this their sixth album.

Sultans of String have never been musicians to pull tight turns and take short cuts in their music. The craftsmanship of each of the musicians has always been flawless, from the delicate curlicues of Drew Birston’s bass lines, the rolling thunder and percussion colouring of Rosendo ‘Chendy’ León’s battery of drums, the poignant atmospherics of Chris McKhool’s strings and the expressively virtuoso fluency of guitarists Kevin Laliberté and Eddie Paton. With Christmas Caravan the ensemble has certainly outdone everything they’ve done before which is, of course, a testament not only to the musicianship of its members but also a celebration of the timeless beauty of the music of Christmas. Indeed it’s an exceptional account of music that has been performed by numerous artists – none with quite so much fervent emotion.

What is also wholly exceptional is the manner in which the Sultans of String meld sophisticated technique and depth of emotion into this repertoire. Soloists – whether vocalists or instrumentalists – are flawless throughout. And it isn’t just Crystal Shawanda, but also Mary Fahl, Nikki Yanofsky, Luba Mason, Rubén Blades, Richard Bona, Alex Cuba, Waleed Abdulhamid, Rebecca Campbell (who appears on four charts, soaring high and mighty on “Hallelujah”), of course, the Gospel fervour of Sweet Honey in the Rock, and the vocalists of the Sultans of String themselves. Each of the vocalists – men and women – performs as if the songs speak to the heart and turn in vocals that are bright, accurate and expressive.

The surprises, when they come, are subtle and magnificent: the strings of the Turkish sextet Gündem Yayli Grubu turn “Greensleeves” into a certifiable Mediterranean Christmas classic. Richard Bona and Waleed Abdulhamid give a whole new meaning to “Sing for Kwanzaa”, their respective countertenor and tenor offering bold attack and vitality. “Happy Xmas (War Is Over)” is superb, performed with imagination and grace by Rubén Blades and Luba Mason and Anwar Khurshid’s sitar brings lyricism and a powerfully communicative quality to “Himalayan Sleigh Ride” as it weaves in and out of the lines performed by individual String-men, all of whom impress not only with individual virtuosity but with the distinctive colour, vibrancy and consistently alertness of their playing.

This recording has a timeless quality to it, and is one to absolutely die for.