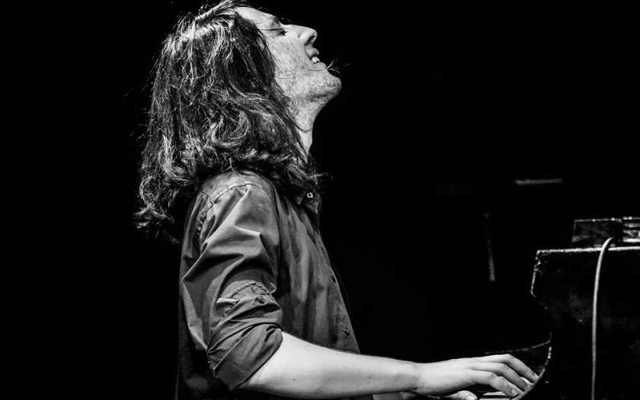 Evergreen (Canceled World) a very Noir release from the iconic label ESP-Disk cues the Orwellian world of 1984, or more contemporaneously, Christopher Nolan’s dystopian vision of the Gotham City of Batman – a world that might include New York, Chicago, or any metropolis for that matter. And even if The Delegation did not intend for this to be so, with a heightened sense of where the habitable world is actually headed the timing of the release could not be more apt. The stark cover of this package features an ominous illustration of a set of railway lines seemingly launching off into an ink-black sea – beautiful, no doubt, but ominous nevertheless. With much trepidation you spin disc one of the package and the agitation of the blood in your veins begins. 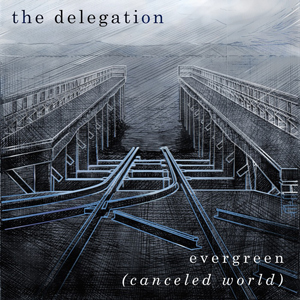 The musicians of The Delegation are meant to be on a promotional tour to support this release. If the impact of the music can be so compellingly felt in the living room one can only imagine the manner in which it be felt in the concert hall, or auditorium, where it ought to be heard. I am not sure how much equipment the band will take on the road with them, but whatever they carry is going to be enough to agitate the senses. The apocalyptic shout is almost deafening. In the echo of its harmonies – or disharmonies, as is the case here – is monumental musical architecture, not unlike that once created by Pink Floyd and, more recently, Radiohead. The latter is a band that Gabriel Zucker – the creator of this music – unashamedly admires. And it shows in his music, which is not unlike that of a nascent revolutionary, tearing up the keyboard, aided and abetted by a musical cohort who rally behind the flag, so to speak.

Howling in the darkness outside not unlike that of Mahler’s 9th Symphony is a trumpet, three other horns and a string quartet, with drums and the voices of two vocalists to bolster the ensemble’s fascinating album of music. In Zucker’s almost confrontational writing I find the vision of one who is hugely expressive. Here is a young man with a profound sense of tone and colour and how it can be wrought from diverse instrumentation to be affectingly ‘cantorial’, expressive and hugely symphonic too. Taking his time and spacing out the dramatic music over two discs Zucker sustains the thrill of experiencing its larger canvas. Although the titles of each movement will remain a mystery even after the music is heard, it’s a small price to pay for such sumptuous fare.

While at the end of it all the urgency of the instrumental and verbal theatricality is clear, the darkest colours of Gabriel Zucker’s music would chime much louder and with heartbreaking pathos had the presentation included a – for want of a better term – libretto. The operatic scale of this composition practically demands it.