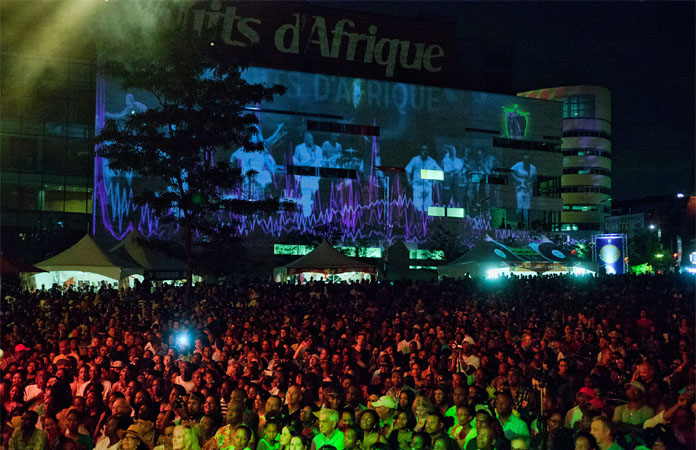 A WORLDWIDE MUSICAL JOURNEY
Thirteen days of emotion and discovery, with no jet lag…

Montréal, May 29, 2018 – Open wider to the world than ever, the Festival International Nuits d’Afrique invites you on a musical journey around the planet from July 10 to 22, 2018, in Montréal. Thirteen days of emotion and discovery with no jet lag: nearly 700 artists from 30 countries in Africa, the Caribbean and Latin America, 125 concerts and activities, eight series, six indoor venues and six days of free outdoor performances from July 17 to 22 on the Parterre of the Quartier des spectacles. A cultural destination marked by authenticity. A concentrate of festive delights for the entire family

Unique and unifying, the festival promises memorable evenings, irresistible favourites and magical moments. From top names on the international scene to new generations of artists, each concert is an event in itself and a musical destination, from the official opening concerts with Femi Kuti & The Positive Force (Nigeria), July 12 at 8:30 p.m. at the MTelus, to the closing concert with the great Sekouba Bambino (Guinea) on the TD – Radio-Canada outdoor stage, July 22 at 9:30 p.m.

FESTIVAL SPOKESPERSON
To reach a broad audience of all ages and origins, the festival has entrusted the role of spokesperson this year to Eddy King, a humourist and musician of Congolese origine, who will also be seen on the outdoor stage as DJ during the Escale Tropicale TV5.

“Sharing one’s culture is also an opportunity to rediscover oneself.” — Eddy King

To convey the essence of the festival, we add the voice of Herby Moreau, well known journalist, presenter and friend of the festival for many years, who now embraces the role of ambassador.

“I am truly flattered and pleased to extend my collaboration with Nuits d’Afrique, as the festival’s ambassador. This is a position that will enable me to continue adding to the renown and outreach of this event that I have cherished for so many years. Long live Nuits d’Afrique.” — Herby Moreau

A DIVERSE PLURAL AND CONTEMPORARY PROGRAM WITHOUT BORDERS
Like world music styles – diverse, contemporary and borderless, the 32nd edition of the Festival International Nuits d’Afrique will again be exciting, exhilarating and festive!

WOMEN’S VOICE
Because the world sound is also borne by highly talented women – singers with spectacular voices and seasoned musicians – a female aura, rich in character, emerges this year from the program. In addition, the Voix du monde series is 100 % female this year with concerts by Djazia Satour (Algeria), Barbara Guillaume (Haiti-Québec), Votia (Réunion) and Banda Kakana (Mozambique).

NEW CURRENTS
This 32nd edition is also marked by the growing presence of the generation of artists who draw upon sounds of African descent and urban music styles, opening up genres and labels. Among these current artists offering new musical aesthetics are, in indoor venues, the Afro-futurist world of AfrotroniX (Chad-Québec) at the Soirée Future Tribe, followed by Poirier, Mr Touré! and Yaya gathered in the electrifying Soirée Afrohouse, not to mention reggaeman Naâman (France) with his DJ Fatbabs

On the outdoor stage, the Zalama Crew collective (Colombia) arrives with its Afro-Colombian grooves, along with Degg J Force 3 (Guinea) with his contemporary and committed Afro-rap, and Boogát (Mexico-Québec) with his urban beats set to Latino sounds.

“I am seeing world music evolve, and I tell myself that the work we have done over the last 32 years is paying off. Mixtures are increasingly accomplished, and cultural encounters are more and more original, but artists have not forgotten tradition. On the contrary, they pay tribute to it. It is exciting to see all the change going on, to see people moving closer to one another and getting to know each other through music, as we always desired.”
— Lamine Touré, founding president of the festival