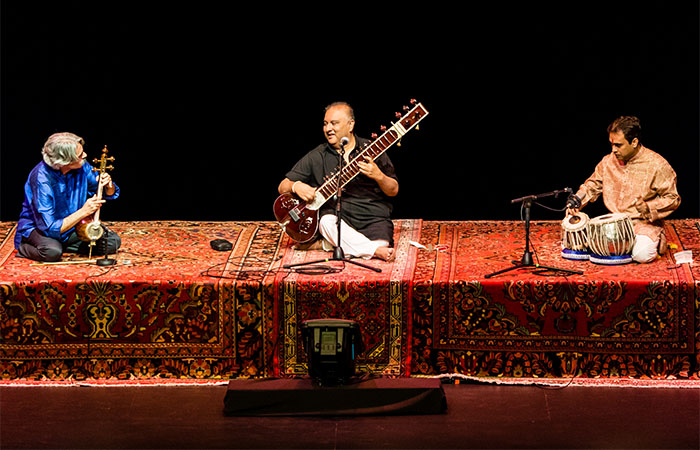 Toronto – The Aga Khan Museum is proud to announce its 2015 performing arts program showcasing the best of local and international talent. The winter/spring season continues to affirm the Museum’s aim to present not only the visual arts of Muslim civilizations, but also live arts and film, creative expressions that continue to evolve through history and cross-cultural encounters today. “We’re excited to present such a broad range of arts all under one roof,” notes Amirali Alibhai, Head of Performing Arts at the Aga Khan Museum. “This breadth is truly unique to Toronto. We hope audiences will be amazed by what they experience here.”

The season officially launched January 28, with an ambitious international film series supported by RBC Foundation. Called Cinematic Discoveries Along the Silk Road and the Spice Route, the series features bold voices and brave new visions from accomplished filmmakers and emerging media artists working in the Middle East, East and South Asia, and Africa – areas connected through the fabled Silk Road and Spice Route. “Many of these films are premieres. Some are world premieres, others Canadian or Toronto premieres. The film series will be a voyage of discovery for audiences,” says Dr. Paul Lee, a Toronto-based filmmaker, producer, and festival programmer who guest-curated the series. Twenty-four films will be screened over five Wednesday evenings (January 28, February 4 and 25, March 18, and April 8) in the Aga Khan Museum Auditorium, a 350-seat domed space equipped with a state-of-the art cinema projector, screen, and surround sound system. Several of the filmmakers will be in attendance to introduce selected films.

Building on the theme of the exhibition The Lost Dhow: A Discovery from the Maritime Silk Route, pipa virtuoso Wu Man of Silk Road Ensemble fame and celebrated singer Sanubar Tursun take the stage in mid- February for a pair of spectacular performances (February 13 and 14, 8pm). Presented in partnership with the Aga Khan Music Initiative, the program explores connections between the music of China and Central Asia. The February 13 performance is sponsored by RBC Royal Bank.

Also inspired by the Silk Route theme of The Lost Dhow exhibition:

Our first theatrical production at the Museum:

Bridging cultures through the Arts:

Focusing on Africa, reflecting the cultural diversity of Muslim cultures:

Inspired by the exhibition Visions of Mughal India (opening February 21, 2015):

Full details about the 2015 Performing Arts season at the Aga Khan Museum are available at www.agakhanmuseum.org

The Aga Khan Trust for Culture (AKTC) focuses on the physical, social, cultural and economic revitalization of communities in the developing world, but some of its programs, including the Museum, span both the developed and developing worlds. AKTC is composed of several individual programs and units: the Aga Khan Historic Cities Programme (http://www.akdn.org/hcp/), which promotes the conservation and re-use of buildings and public spaces in ways that spur socio-economic development; the Aga Khan Award for Architecture (http://www.akdn.org/architecture/), which awards a prize for architecture every three years; the Aga Khan Music Initiative (http://www.akdn.org/aktc_music_about.asp), which supports talented musicians and music educators who strive to preserve, transmit, and further develop their musical heritage in contemporary forms; the online architectural resource ArchNet.org(www.archnet.org) and the Aga Khan Program for Islamic Architecture at Harvard University and the Massachusetts Institute of Technology (http://web.mit.edu/akpia/www/).

The Aga Khan Development Network (AKDN), a private, international, non-denominational development organization, is active in 30 countries and employs over 80,000 people globally. Its ten agencies address complex development issues, including the provision of quality healthcare and education services, cultural and economic revitalization, micro-enterprise, entrepreneurship and economic development, the advancement of civil society and the protection of the environment.

Concert: Footsteps of Babur at the Aga Khan Museum