The Canadian calendar – just like those in the US and Europe and like the Holy Roman Empire – is full of holidays celebrating some patron saint even if we don’t really know why they are being celebrated. Often the celebration lasts a few days, a week or two and sometimes even whole month, which is ironic because most of us forget what is being celebrated and why. This almost always happens during Black History Month each year because most of us just aren’t invested or care about where we came from or why our original Black culture needs to be celebrated. It’s important because “Indigenous” – a colonial word, that is least offensive to the people it is used to identify as such – were inhabitants of the earth’s land after the Human Diaspora emigrated from its original home in Africa and traversed the continental landmasses, probably between 30,000 and 50,000 years ago and certainly long before “White Caucasians” became a thing thanks to the now-extinct Neanderthals that begat them.

If you think that’s enough, consider this ironic fact: How many of us knew that June is Indigenous History Month. And how many of us know that early Eurasian settlers practiced oppression and discrimination on Indigenous peoples; for instance the Adivasi people of India, the Mongolians in China, the Māoris and Aboriginals of New Zealand and Australia, a whole diaspora of Indigenous peoples such as the Sami and others spread across Europe and of course the numerous tribes of Indigenous Peoples in North and South America. In almost every instance some of the most inhumane forms of discrimination have been perpetuated upon them in the worst and most savage – even diabolical – manner. Worse still these Indigenous peoples continue to be discriminated against and marginalized even in countries such as ours (Canada, that is), where efforts are afoot to remedy centuries of oppression.

The Truth and Reconciliation Tribunals set up by the Government of Canada may be a small step forward and there is – proverbially speaking – miles to go before we sleep. And even if we may have all but forgotten how far we have come, it’s time to remember something else about Indigenous culture – at least in Canada – where (as much as there are things to weep about and remedy) there is also much to celebrate especially in the visual and musical arts. To make that happen June has been designated Indigenous History Month by the Government of Canada – remarkably – not this year, but a whole decade ago. The Government has been celebrating Indigenous History Month in a many splendoured manner which, of course, many of us either didn’t know about or chose not to participate in in a way that was more than just symbolic or gratuitous.

And because there can be no “World” without “Indigenous Peoples” it’s also true that there can be no “World Music” without “Indigenous Music” which is why in taking our own baby steps at World Music Report may be a tad overdue, now is as good a time as any to raise our own voices in support of the Indigenous Musicians. This can be a daunting task. The world of the indigenous artist is so remote and isolating that for decades, many a famous of musicians might have often either suppressed his or her natural heritage to enter the commercial world of music forfeiting authentic culture for the home of easy commerce. 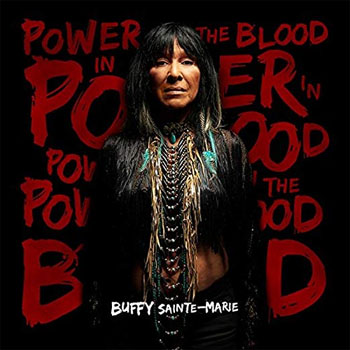 As a result very little is left of the authentic culture in what is documented and catalogued in a global library. But change appears to be on the way – if not well on the way in many parts of the world.

In Canada, for instance, the iconic Buffy Sainte-Marie has blazed a trail with a voice that has, for years, spoken to the power of ploughing the lonely furrow of the Indigenous Artist. Born into the Piapot Plains Cree First Nation Reserve in the Qu’Appelle Valley, Saskatchewan, Canada Miss Sainte-Marie was later adopted, by a couple – Albert and Winifield Sainte-Marie – of Mi’kmaq descent and grew up in Massachusetts. She attended the University of Massachusetts Amherst, earning degrees in teaching and Oriental philosophy and is known to have graduated in the top ten of her class. In 1964, on a return trip to the Piapot Cree reserve in Canada for a powwow, “she was welcomed and (in a Cree Nation context) adopted by the youngest son of Chief Piapot, Emile Piapot and his wife, Clara Starblanket Piapot, who added to Sainte-Marie’s cultural value and place in native culture”.