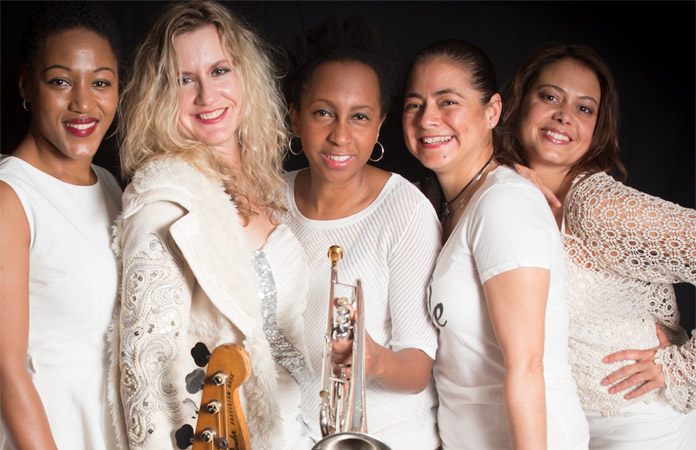 Bassist, percussionist, songwriter, and Brooklynite Dawn Drake, the eclectic frontwoman of Dawn Drake & ZapOte, speaks a dozen musical languages, from the deep rhythmic traditions she studied in Ghana to the percussive vernaculars of Brazil and the myriad of musical patois perfected by Caribbean traditions. Blending elements of Afro-Cuban jazz, samba, and Afrobeat, her energetic songs and socially conscious lyrics celebrate love, universal consciousness, women’s empowerment, compassion, empathy, and respect for the environment.

ZapOte’s sound and aesthetic could easily be represented by zapote itself, the sweet, pink, avocado-like Caribbean fruit that grows in Dominican Republic, Cuba, Mexico. And if Drake’s previous album’s happy and upbeat style of music could be characterized by the zapote, the 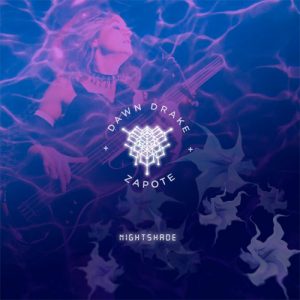 band’s latest album Nightshade (released on November 1, 2019)  is just as fittingly named after that fruit’s distantly poisonous cousin and is, in many ways, a departure from her previous work.

The ten-track LP is a far less vocal and more instrumental exploration of the darker side of ZapOte’s sound.  “It’s more ambient and moody,” says Drake. “Some of the themes that appear on this new album are looking at darkness or depression and the symbology of coming out of it. For this album, I wanted to write more instrumental songs and focus more on the compositional aspects of the music to represent that process, rather than lyrical themes with chordal accompaniment.”

Drake insists this is a process so universal that she sees it represented in many disparate cultural traditions around the world. She has been following the Yoruba tradition from Cuba and its powerful feminine goddesses for a long time and notes there are other similar female icons in Europe, and universally. These are goddesses who represent the seasonal darkness we all go through. Says Drake, “These tales and mythological figures have existed for centuries that represent the human hardship of going through different seasons and cycles of the year, cycles of life, death and rebirth.”

The album’s first single “Oya,” released last month, is an exploratory narrative on this theme. Oya is an Orisha in the Yoruba tradition of Cuba, a female deity of wind and storms and transitions. She’s also the gate-keeper of the cemetery, so it’s fitting that the album is timed to  come out on November 1st, which is the Day of the Dead.

While the album does incline to the darker side thematically, it still includes those fun sort of twists and turns that ZapOte has always been known for. There are also a lot of themes that speak to the trials and tribulations of the modern relationship, such as in “Salon du Coiffure,”  a darkly humorous track that waxes cynical behind a bouncing bassline and brassy horn blasts about the peculiar nature of miscommunication between lovers in the digital age.

Drake’s music has been described as Global Funk or World-Beat­-Meets-Funk, though she prefers to call it “chronic grooves from the global south” because the influences are culturally and geographically expansive, while also solidly originating from cultures that have historically been relegated to the world’s postcolonial margins. As a percussionist, Drake studied extensively in Cuba, Brazil, and Ghana before gravitating more towards the bass during the Antibalas scene of late-‘90s. NYC. “I did not choose the bass,” she quips, “the bass chose me just like the batá chose me.”

She’s been playing all these different styles of music in New York since, and has been fronting ZapOte, a mostly female band that puts a premium on highlighting women in music for the past ten years. As such, Drake has done a lot of work on gender equality and women’s empowerment through music with organizations like New York Public Schools, Brooklyn Arts Council, and even the US Embassy for a project to benefit Belize.

Social justice has always been a big aspect of the band and what it represents as well. Nowadays, Drake teaches a class at the John Jay College of Criminal Justice called ”Popular Music of the Caribbean” in which she is exploring the fact that the music of the Americas is all interconnected. Especially as someone who grew up in the American South, there is a lot of knowledge about our shared history and culture that is glossed over in the average student’s history books. She believes it is imperative to give a fuller view of this history. American music and culture has deep and specific elements from West and Central Africa, Cuba, Haiti, Native America and other non-white roots. She says we have so much more work to do to correct skin color privilege in this country as well as systemic racism and oppression. One thing that can help is to acknowledge our shared musical and cultural history and to give credit, as well as commercial credit, where credit is due.

“There’s no turning back, whether it’s rock or country or bluegrass, it’s all “creole” culture and African-American music in origin,” explains Drake. “And so I embrace that and I give credit all the way for the music that I write, and for what I’ve studied and learned from people. That’s one of the reasons why we’re calling this music chronic grooves from the global south, because obviously, and unfortunately, in our current political climate, a lot of people don’t want to acknowledge what all we have in common. We must be more unified in recognizing that we do live in a multicultural society, and we have for many, many, many years.”