You cannot call your recording La Próxima Traición and expect to get away with emphasis on the elegance of the tango alone. Ben and Winnie certainly make their deep dive into the art of the tango – music and dance – one that doesn’t shy away from the beautifully lurid aspects of the tango. The fact that this milonga is stripped bare of all the orchestration, leaving just the two musicians – a bandoneonist and pianist – is significant. Reduced thus, to two players – the same number [and gender] of folks who once danced this magnificent, hot and sweaty, and sexual and dance, bodies entwined with gloriously elliptical movements cutting the rug like some elaborate seduction ritual in a bordello, Ben and Winnie have re-imagined tango at its visceral best.

The music of La Próxima Traición is a match for any tango music recorded by the accomplished Argentineans in recent times, it is also, in several respects, almost as stellar [if not as stellar] as Amy Briggs’ Tangos for Piano [Ravello Records, 2005]. If anything this recording gets closest to the very breath of life of the tango – and not only because this recording features the two characters locked in a musical embrace, re-creating the scenario of the two figures locked in embrace in the tango, where it was born – that is, in the bordellos of Buenos Aires. But merely putting two musicians together to play the part of tango partners is simply not enough. 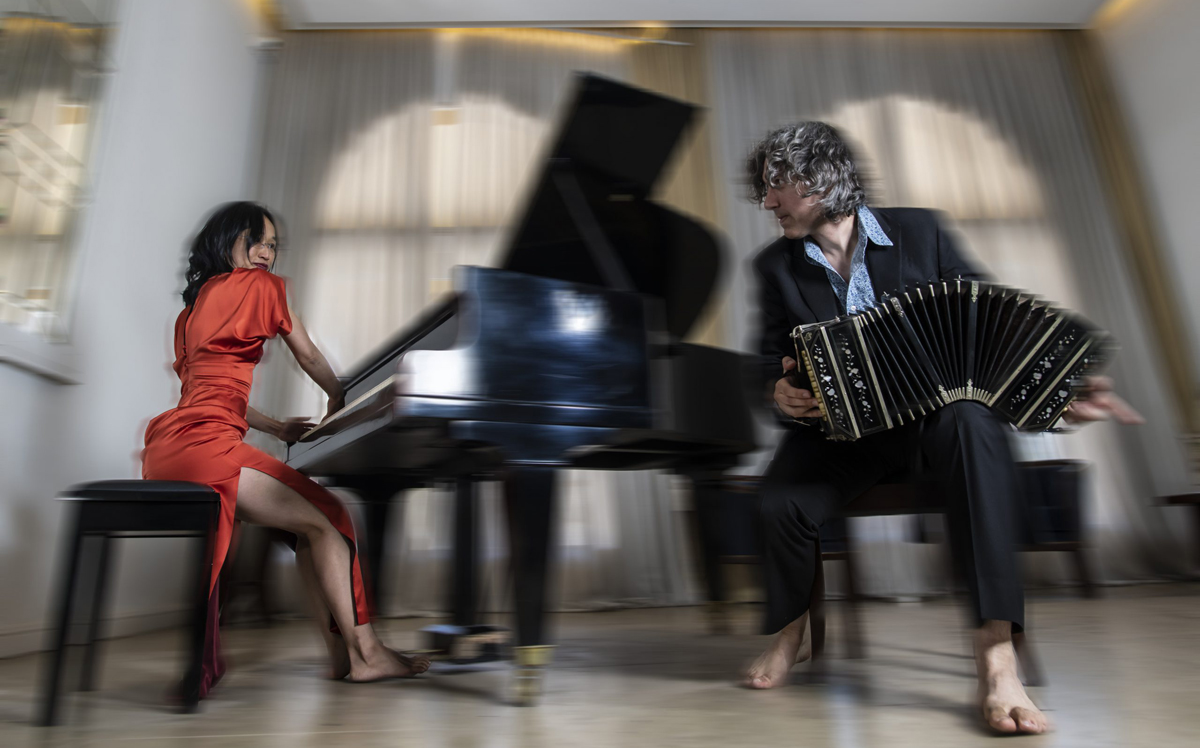 Ben and Winnie’s approach to the music is so visceral that no sooner than their music begins they cease to become players, but instead metamorphose into tango dancers executing the gliding, mincing steps of the dance with rapier-like precision. Both bandoneonist and pianist inhabit the darker side of tango with enormous suggestive power using a sharp and forceful attack of black and white keys [in the case of Winnie Cheung] and bandoneon keys and buttons [in the case of Ben Bogart]. This is not to say that the music lacks elegance. Far from it. But by seeming to employ a piercing touch and also melding this with graceful glissandos we come face to face with the finest impersonation of dancing characters engaged in the most impassioned dance.

Thus we experience something truly special in this tango music on La Próxima Traición. This title could be translated as “the next treason” or “the upcoming betrayal” as it speaks to the revolutionary nature of how tango developed in Buenos Aires. The music mirrors the visceral feelings expressed in the heat of the tango. It also seems to pay homage to an aspect of tango that is often ignored: an inspiration that springs from the black, deeply African candombe. The rhythmic attack employed everywhere in this music appears to be born of the legendary dancer Precinto’s step which involved freezing one foot while inching the other forward, pushing out with both palms to the side of his body as he danced.

And so while we listen to this music – especially to Logatti’s “El Irresistible”, on Pugliese’s “Negracha” as well as in Piazzolla’s “Milonga del Ángel” – the musicians become the music, the music becomes the dance and the dancers become a living embodiment of tango.