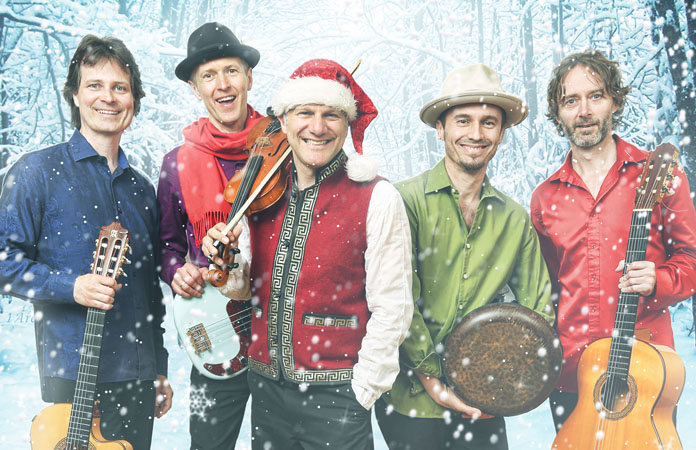 3x JUNO nominees/3x CFMA winning ambassadors of musical diversity Sultans of String have expanded the traditional notion of Christmas music with their new, genre-hopping disc, “Christmas Caravan”, injecting it with new-found energy and non-traditional sounds. Recorded and co-produced with JUNO Award winning engineer John ‘ Beetle’ Bailey, this isn’t your typical holiday album. You may recognize a few titles, but you’ve never experienced seasonal music quite like this before.

Sultans of String’s acclaimed world music tapestry has been amplified on this release through its embrace of orchestration and pop, and spurred on by a stellar cast of guest musicians, bringing even more colour to their lively palette.

“We wanted to make a real contribution to the Christmas repertoire, and hopefully create some new standards” says bandleader/violinist and Queens Diamond Jubilee recipient Chris McKhool. “This is a Christmas album, but approached from the perspective of a world-music band. We explored diverse genres, from Quebecois fiddle tunes to collaborating with a traditional Turkish string ensemble, and jump around from the classic sounds of the Andrews Sisters, to a Himalayan sleigh ride, African roots music, Gypsy-jazz, rumba flamenco, ska, and the grandeur of the symphony.” 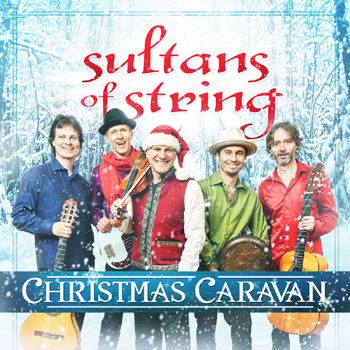 Why make a Christmas album for a band that has earned its street cred on performing music from diverse cultures? McKhool explains “My parents are from Lebanese and Egyptian backgrounds, and also celebrated Christmas in the home. So Christmas songs as well as music from around the globe, were always part of my upbringing. With this record we created the spiritual Christmas album I have always wanted to hear that honoured this tradition, as well as bringing in diverse cultures. As a violin player, I also performed with string orchestras in my youth, so the icing on the cake was traveling to Prague to record with the City of Prague Symphony Orchestra!”

Adds McKhool, “One of my favourite tracks, Jesous Ahatonhia (The Huron Carol), is fascinating to me. I went back into the archives and found a direct transliteration of the original Huron-Wendat lyrics, which were written in the 1600s by St Jean de Brebeuf. This is Canada’s first Christmas carol, and while there are some complex issues around this song, it is of great historical significance. Now people can hear the intent of the original lyrics for the very first time. Ojibwe artist Crystal Shawanda vocal is so compelling on this song!”