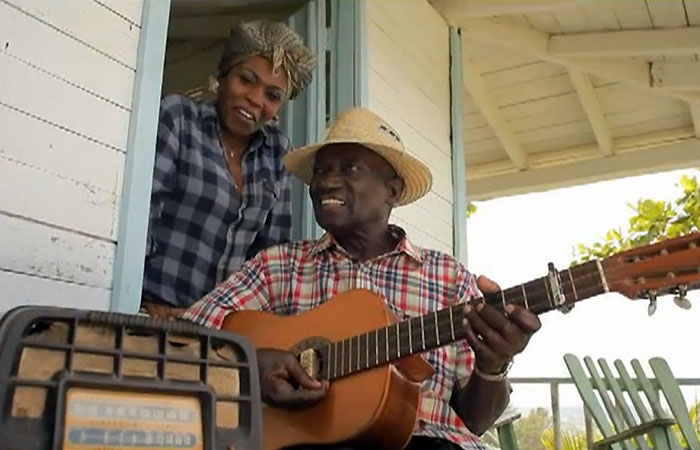 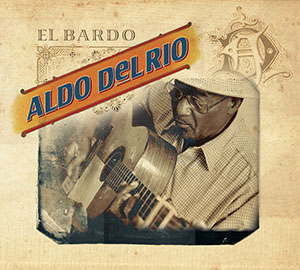 Before the Cuban pianist came to fame, there were trovadores. Depending on which province a Cuban listener resided, one trove was greater than the other. But visionaries such as Sindo Garay stilled ruled the roost – Sindo Garay lived more than 100 years actually. And now there is Aldo Del Rio whose album El Bardo is nothing short of sensational. He sings in a voice brimful with emotion. His songs seem to start in his soul, then surging through his beating heart the lyrics soaking in emotion escape his lips. His voice is sometimes whisper-soft; at other times it rises in volume and is raspy and sensuous. If it is sometimes pitchy, it does not matter, because he is a griot and he bends and twists his voice to squeeze out the story with burgeoning feeling. Americans will identify with his music if they have heard both Woody Guthrie and Bob Dylan – especially late-Dylan. Europeans will think of John Martyn. The critical difference is that most of the material that Mr. Guthrie and Mr. Dylan, or John Martyn sang was their own, while Aldo Del Rio’s is traditional; some of it hundreds of years old.

El Bardo, despite the fact that it is a relatively recent recording (2000) and an even more recent release (2014) is heading for classic status, if it is not there already. It has been superbly recorded, but still has the feel of a field recording. Certainly the songs featuring Aldo Del Rio alone with his tres feel that way. Consider “Mía,” an exquisite song -penned by romantic Mexican composer Armando Manzanero- that is drenched in emotion and is one of those songs that feels as if this record were something that a modern day Alan Lomax did. Another aspect of this recording is that when Aldo Del Rio sings, the African roots of son become almost palpable. The finest example of this is Miguel Matamoros’ well-known song “Lágrimas Negras,” which he does not so much sing as he cries. It almost sounds as if he were taking a page from the Brasilian song, the chorinho, that is cried more than it is sung. In all of this Aldo Del Rio is a master of voicing; both the African influences of Cuban son as well as in the emotion of deep song learned with Spanish Duende. The singer reaches deep into the heart of Afro Cuban musical tradition.

With the release of El Bardo, the Sunnyside label may be giving notice that it may be exploring roots music. If this is so, it is a welcome sign. Folkloric recordings such as this fine one would hopefully suggest that there is more to come. Fans of the label who find this kind of fare delectable will surely be looking forward to more of this kind of repertory from Sunnyside.

Singer, composer and tres player, Aldo del Río is native of Pinar del Río, the province on the west coast of Cuba. This septuagenarian artist has got a peculiar carisma, which gives him a special attractivity towards all kinds of audience, and stands out for his magnificent technique in playing the tres, instrument he discovered and learned from the remarkable hand of Niño Rivera. In his regular live performances he is followed by a quartet and covers a wide repertory, going through Cuban son, traditional canciòn, bolero, cha cha cha and guaracha.

He also went on international tours in various countries of Africa, Europe and Latin America, and in Cuba he participated in some prestigious events such as the Festival de la Musica Tradicional in Santiago de Cuba, the Festival Internacional del Tabaco and the Convenciòn de Turismo in Varadero. In 2002 he was decorated with the Distinciòn por la Cultura Nacional and in 2004 Cubadisco dedicated a big homage to his music path. Aldo del Rìo participated in the recording of many CDs with different record signatures. His album “Soy como soy” was nominated for the Cubadisco Award 2008 and for the ‘traditional music’ category and harvested a great success in countries like Spain, Brasil, Canada and United States.

The Musical Voyages of Marco Polo