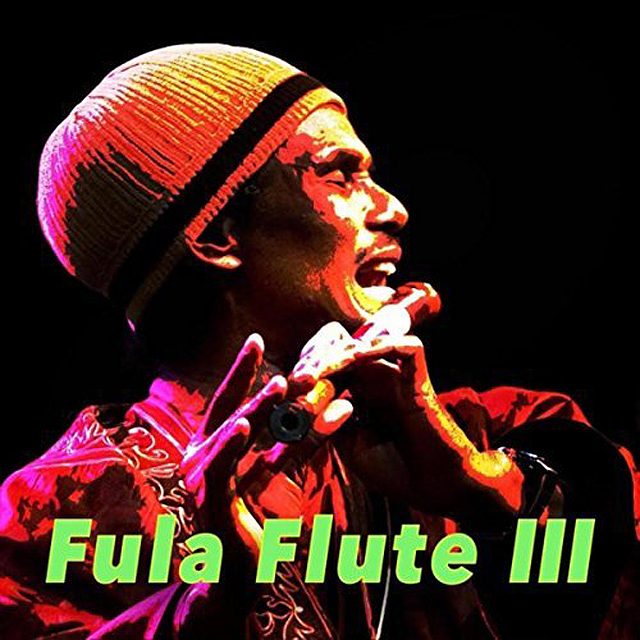 The album Fula Flute III is the explosive 2016 release from Engine Studios and features a duet between the great Guinean tambin master Bailo Bah and the tambin’s greatest innovator, the Quebecois, Sylvain Leroux. Though the term Fula is really a misnomer for the flute, which is actually a tambin, is a diagonal diatonic flute without a bell, made from a conical vine, with three finger-holes and a rectangular embouchure with two wings on either side and is the principal instrument of the Fulani (Wolof: Pël) people of West Africa.

Fula Flute III raises the bar on the music of the Fulani with the extraordinary dialogue between Bailo Bah and Sylvain Leroux. In each of the nine pieces included here, the listener is treated to the magical and frenetically trance-like performances by the two players. The visceral energy of Bailo Bah, his short stabbing phrases punctuated by squawks and smears simultaneously vocalised and played in a staggering display of music on the tambin. Often through the performance it feels as if Rahsaan Roland Kirk has come back to life, reincarnated as Bailo Bah, complete with a doppelgänger of his own in Sylvain Leroux. As if that were not enough, Leroux matches Bah’s playing with monumental squawked and sung, melodic lines of his own.

The music is played by the two tambin-masters and is deeply rooted in both the spiritual and secular traditions of Guinea. Both players plumb the depths of these traditions in “Bamana Song” and even more so in “Djama Mayin Fouta Kama”. In both pieces Bah and Leroux dig into the music’s secrets – the mysteries of which might only be partially revealed here, despite which their art reaches the realms of the Divine, whose blessings are often invoked in Bah’s vocals, seemingly wrung from the heart through the lips which make plaintive, urgent melodies on his tambin. Breathtakingly beautiful tone colours emerge, as melodies are woven into a wondrous canvas brought to life by Bah and Leroux. Meanwhile…

As in earlier tambin recordings Sylvain Leroux has an unique role to play in Fula Flute III. His “Chromatic Improvisation” has increased the vocabulary of the tambin. This is something Leroux is well-known for. However, the Canadian, is also considered a “native Fulani” not only because of his mastery of the instrument, nor because of the design changes he has made to extend the chromatic possibilities of the conventional tambin with “chromatic” instrument, but rather because in introducing the “chromatic” tambin to young Guinean players in his role as an educator Leroux has helped revolutionise the possibilities of Fulani music through a next generation of musicians, while continuing to sustain the present one with tambin-masters such as Bailo Bah.