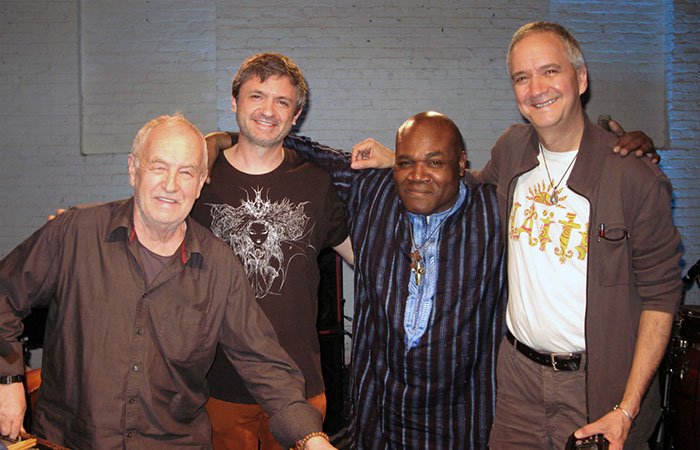 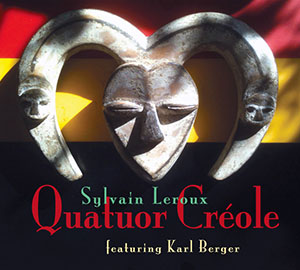 The Montreal-based flutist, Sylvain Leroux is a peripatetic traveller. When he is not in Montreal, or Chicago, or New York, he might be in Toronto or Vancouver, heralding the uninitiated into the sound of his tambin, a Fula flute, played by the people of Conakry, Guinea, in West Africa, a place he frequents these days as he is preparing to record music with the people of Guinea. Two years ago he was in the US and recorded an iconic album, which featured his music on tambin and on dozon ngoni, a kind of banjo hewn from tree-trunk, which he plays so masterfully on Quatuor Créole. This is an album of mystery and magic, as with many musical sojourns undertaken in West Africa, or greater Africa, as a whole. It is ironic that in this electronic age in the 21st Century, when man is about to find ways to mimic the sound of the wind on Mars, that Africa remains a secret to most musicians, ethnomusicologists, except for some remarkable and visionary work by Ornette Coleman, Bill Laswell and Sylvain Leroux, among others.

Let it not be forgotten that Mr. Leroux is from Montreal, where resides that rare breed of Canadians called Quebecois who are unafraid to embrace cultures that even scare them. Such a collision often results in music as daring as what is on Mr. Leroux’s record. In Brasil this kind of cultural collision is often referred to as anthropophagy—a cannibalisation of one culture by another resulting in a third. Such a dramatic interaction is what caused Charlie Parker to fall into the time warp that he did, resulting in the Bebop idiom. The same happened to Thelonious Monk, where in the secrecy of his fecund mind, he re-discovered what it meant to be African. And such is the munificence of the Conakry people, in Guinea, who have made Sylvain Leroux one of their own. Something that has enabled Mr. Leroux to be completely subsumed by the Fula and produced such mystical music as he does on Quatuor Créole. It behoves a musician as inspired as Mr. Leroux to be invited into the inner sanctum of Fula music, to create a cross-cultural idiom, drenched in the blues, and to produce music such as “Oxossi” and “fantaisie créole”—music that is hypnotic and could only be linked to the Gnawa tradition.

In fact, Mr. Leroux is so far into the culture of the Fula that he can only be Fula himself, having forsaken somewhat the decorative elements of his Quebecois nature. Mr. Leroux has always been a follower of Thelonious Monk. Consider how he resets Mr. Monk’s imagined psyche on the dramatic “Monk in paradise,” the pianist who used to dance in circles when he was joyful finds spiritual regeneration in the collision of his arch polyphony and polyrhythms with those from whence his ancestors might have come. This music lies at the heart of “fantaisie créole.” Mr. Leroux’s heraldic flute melds well with the ritualistic drums of Sergo Décius who is en pointe when it comes to cross referencing the polyphony of Mr. Leroux’s reeds and the canticle-like vibes and piano of Karl Berger, who has, for so long, championed the cultural anthropophagy that Sylvain Leroux practices in his music. Imaginary figures stomp and dance vigorously as the dance of the faithful is carried out when infidels are welcomed into the inner circle making them Fula’s own. This is a masterful album, something Sylvain Leroux who is completely beguiling on “le message” singing multiphonics through the flute should be justifiably proud of and make those who follow his successes hunger for more. Fortunately another album is possible close at hand.

Sylvain Leroux was born in Montréal. He studied classical music at Vincent d’Indy School of Music and at the University of Montreal. He attended the Creative Music Studio in Woodstock, NY where he was exposed to World music, participating in workshops led by world class artists. In 1978, in Montréal, he worked with Yaya Diallo in performances and recording of the LP Nangapé In 1981 Sylvain founded the group Mysterioso, dedicated to the music of jazzman Thelonious Monk and performed at the Montréal International Jazz Festival, 1983.

At the same time, he was also a member of Bantamba a group that broke new ground in the meeting of traditional and modern African music. In the early nineties, he founded his own group and released a recording: “Sylvain Leroux and the Maintenance Crew.” Since 1990, Sylvain also became active as a freelance musician in New York, playing for many groups and dance companies in the Afro-Brazilian, African and African-American field. In 1995, he took a trip to Conakry, Guinea (West Africa) to study the tambin, the peculiar flute of the Fulani people. He has become one of the rare outsiders to play this astonishing instrument. He has recorded with: Takadja Ñ on the Juno nominated album Dive as well as with Nego Gato, Naby Camara, Mohamed Diaby, Magbana, Martino Atangana, Abdoulaye Diabate, Lucia Hwong, Emeline Michel; In 2005 he was on the world music masterpiece Bata Mbira helmed by Michael Spiro and Michael Williams. He leads the Fula Flute Ensemble and the African Jazz group Source.

Sylvain is also an illustrator and graphic artist. You can see some of his work at: www.beam.to/slgraphics.