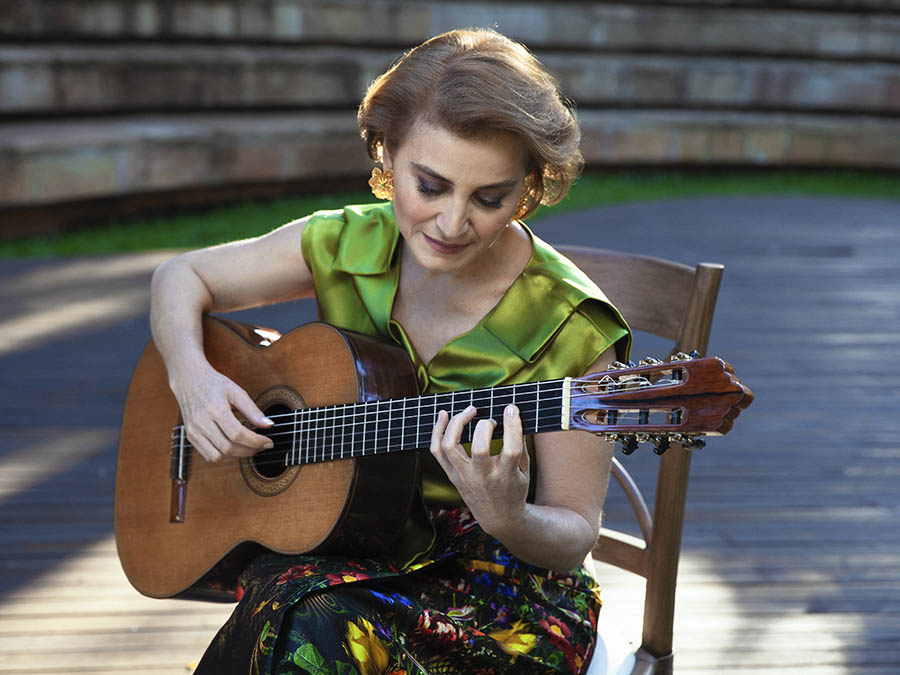 Even with a first spin of this recording Legado one wonders who but Berta Rojas could have played this music that honours legendary women guitarists Ida Presti and Maria Luisa Anido. The absolutely breathtaking album could even be Miss Rojas’ best – although such a judgment may have been passed on every album that Miss Rojas has ever recorded since her debut; she is that prodigiously good at what she does. In fact, on evidence put forth by this repertoire it’s safe to say that Berta Rojas is made completely of music – despite the fact that listening to the radio these days [in North America, at least], you’d think that the world of the guitar comprises just one chap from Montenegro.

Perhaps Miss Rojas would have been better-known had she recorded Broadway tunes and Rock standards as many musicians today seem to want to do. After all it puts their name “front and centre”. However, in picking the repertoire that she will put down on record Miss Rojas also makes a statement of sorts: that only the best has made it into her line of sight and that only the best is good enough to go on record. Moreover, as a serious musician, she knows that there is a whole world of music in South America, written specifically for the guitar that still awaits discovery. And she seems to always be first out of the gate, not simply “discovering” this music, but playing it in such a noble fashion that she often sets the bar for every other guitarist.

Take the music of Ida Presti [1924-1967] and Maria Luisa Anido [1907-1996] – the former a French composer and virtuoso guitarist who played solo and as a duo with her husband, Alexandre Legoya, until her untimely passing, at the height of her powers, and the latter one of the greatest guitarists to emerge from Argentina. Miss Presti was so famous in her day that the great Andrés Segovia believed “…heaven had bestowed to her the gift of musical communication.” Miss Presti’s music on this disc is diabolically challenging thanks to her near-impossible left hand stretch, which necessitated unusual “right-hand positioning…”. Her work – as both composer and a performer is [and was] a gold-mine of articulation and timbre. In the performances of Miss Presti’s work as well as compositions dedicated to her by others, Miss Rojas, with her immaculate technical address and ravishingly songful articulation and expressive tone strikes precisely the right balance between classical strength and private introspection.

Her performances – especially of “Segovia” and “Danse rythmique” as full of radiant spontaneity and tumbling fantasy are quite breathtaking. The same holds true of the dedicatory pieces and the remarkable compositions of Maria Luisa Anido, whose work [represented here] is marked by an abiding love for her country and its cultural topography expressed in its folk forms, which spoke to her in the silence of her heart. This was something that emerged in Miss Anido’s classical world, and expressed as a composer and performer throughout her long and stellar career. Miss Rojas plays the work of the legendary Argentinean woman-composer with equal parts reverence and captivating swagger. In fact, “Aire de Vidalita” will seduce you into entering quite another world altogether.

The album ends with a suite entitled “Anido’s Portrait”, written by the great Brasilian guitarist Sergio Assad. Of particular significance here is also the fact that Mr Assad has also dedicated the suite to Miss Rojas. This speaks to the extraordinary esteem in which Miss Rojas is held in the rarefied world of classical guitar-playing legends. In the first movement: “Chacarera” Miss Rojas combines suppleness of purpose leading to a scherzo of sorts . Despite the virtuosic nature of this part of the work, Miss Rojas eschews any suggestion of hectic flashiness. The crystalline essence of the second movement “Zapateado” is distilled [by Miss Rojas] with requisite lump-in-the-throat poignancy. “Barynya”, which follows, positively  tingles as shadows seem to lengthen and the time for reminiscence seems to loom before one is seduced by the sashaying of “Salsa”, which fairly crackles with intoxicatingly balletic movement, wit and ear-pricking detail. This is where the full extent of Miss Rojas’ mighty virtuosity is on full display.

The fact that this is a marvellously engineered and recorded album is a huge bonus. Every aspect of Miss Rojas’ extraordinarily brilliant technical ability – whether nail-sizzle and nut-side, or the in the percussive colours that emerge not only from virtuoso pizzicato playing but also drumming on the body of her instrument – looms large and often makes Miss Rojas emerge as a whole chamber ensemble. This is what you would call an album to die for…Bravo Berta Rojas!