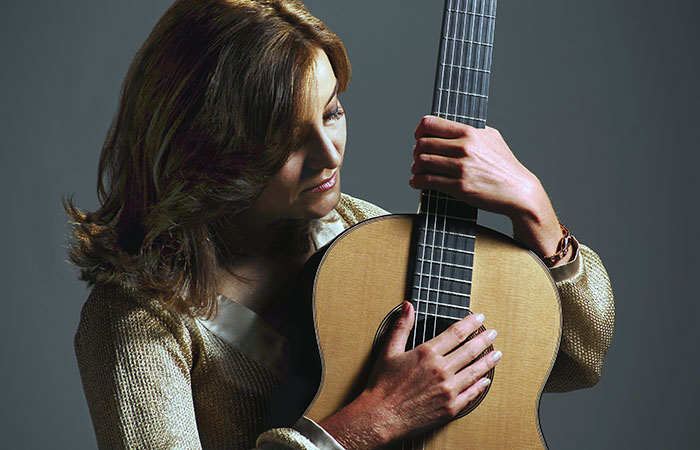 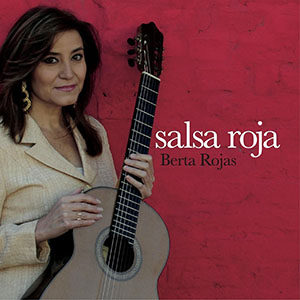 If the renaissance of modern guitar playing began with the Spaniard, Andrés Segovia and continued under such luminaries as Agustín Pío Barrios of Paraguay, the Brasilian Laurindo Almeida and the Englishman, Julian Bream, it is now being well-served by a group of fine instrumentalists such as the Sergio and Odair Assad duo, Carlos Barbosa-Lima of Brasil, Leo Brouwer of Cuba (when he was still performing) and Berta Rojas of Paraguay, who is one of the most celebrated women in her field of music. Ms. Rojas’ playing is informed by electrifying technique and virtuosity, and features her characteristic, sinewy tone, a palette of myriad wondrous colours and is framed by subtle, swinging gesture and soulful enunciation. While Ms. Rojas may have a delicate touch at times the overall tonal energy of her playing suggests a mighty firm hand, whose fingers glide across the strings with such a springy manner that it might recall the leaps of an excited impala intoxicated by the taste of a rain-bearing wind. However it is more than mere fingers that celebrate the music; Berta Rojas is a musician of fascinating intellect and a great depth that reaches down to her very soul. This is what makes her rather special: that she is moved not only by her reading of the music and the diacritical remarks of its composer, but rather by the emotions that are suggested by the secret narrative that runs parallel to the progress of the notations.

Salsa Roja is something of a tour de force; a musical journey that traverses the wondrous regions of South America including Ms. Rojas’ native Paraguay. Although the music may be overtly Latin in flavour and taste, it has a beating heart that is universal in nature. This is because Berta Rojas’ heart belongs to the earth. The guitarist’s magnificent sweeping style is reminiscent of an artist who roams the whole wide world of music even though her heart is in Paraguay. As a result Ms. Rojas appears to traverse the breadth and topography of the earth, imbuing the colours and fragrances of each place that her heart and soul might chance upon. The program on Salsa Roja reflects just this and shows how her exquisite virtuosity adapts to each nuance of the music depending on its every subtle demand. Beginning with the marvelous composition by the contemporary composer, Edín Solís (a member of the renowned group ‘Editus’ from Costa Rica), who conducts the astounding Cateura Recycled Instruments Orchestra—instruments made from recycled materials by the ingenious Nicolás Gómez and performed by musicians who are as fine in sensibility as musicians from some of the world’s finest orchestras. “Tambito Josefino” is based on a traditional and very popular Costa Rican rhythm known as Tambito. Ms. Rojas adds overlapping harmonies and colours that are taken from elsewhere in the universe. The complex rhythms heighten the experience of the piece.

Mr. Solís’ other composition “Calle del Viento” is a beautifully moveable feast with tones and colours that suggest the breathtaking aspects as suggested by the spectral nature of the music. The celebrated British composer, Vincent Lindsay-Clark composed “Fiesta Americana” especially for Ms. Rojas and for the date. The suite in four parts has been influenced by the folkloric dances of South America. It opens with an intricate set of cross-rhythms based on the Paraguayan danza galopa that is set in 3/4 and 6/8 time. The swing of delight is infectious and tempers the rest of the parts of the suite. Ms. Rojas’ robust energy affects the temper of the music especially during the swaggering tempo of the part entitled “El Vuelo de la Mariposa” -a section that showcases the guitarist’s genius in her almost natural impulse to adorn. The magnificent Mexican composer, Julio César Oliva is responsible for the next set of music that is taken from his “25 cuadros” -an astounding array of solos written for the guitar. The final chapter of this most memorable recording comes from the Argentinean guitarist Quique Sinesi. The aptly entitled “Danza sin fin” is a masterpiece of abstraction that was originally written for a duet with the pianist Carlos Aguirre and is recorded as a solo in 6/8 and 3/4 time. The stark beauty of the melody is highlighted by the solo guitar as Ms. Rojas captures the interminable nature of the piece and its epic melancholia. It is a superb end to a recording full of dramatic gesture and depth of expression. The recording—certainly a magnum opus—must also surely mark Berta Rojas as one of the most important individualists of the modern era of the classical guitar.

Berta Rojas on the web: bertarojas.com