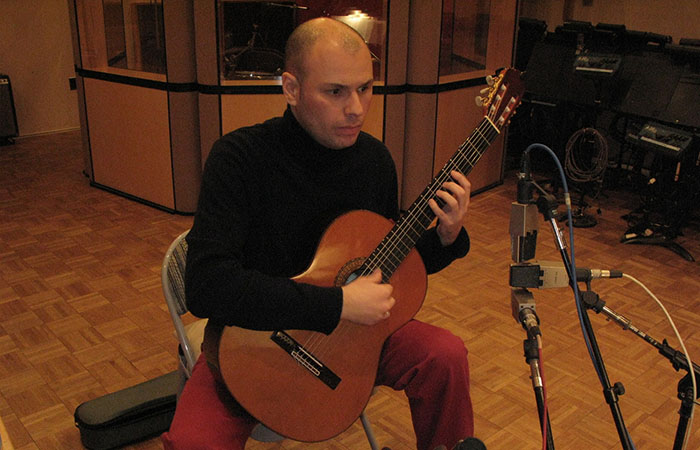 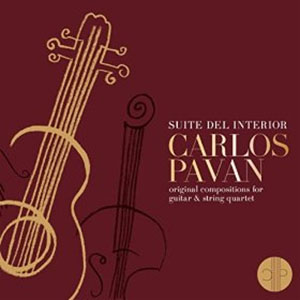 The beautiful Suite Del Interior by the Argentine guitarist Carlos Pavan is sometimes described as being a “mixture of classical, folk and jazz music”. But perish the thought. This is a magnificently composed classical piece that is based on Argentine folk forms—but in a Béla Bartók/Zoltán Kodály manner—which shape its musical destiny. It is played with great virtuosity and startling intellect by Mr. Pavan, a guitarist of no mean skill and brilliance who, when the need arises, adds the whimsically-named PUBLIQuartet, comprising New York-based musicians who follow not simply Mr. Pavan’s ideas and marking points, and metronome, but the composer’s lead in digging deep into the soul of the piece to bring its emotional depth out into the open.

Argentinean music at its best goes far beyond the Vals and the Tango and its Spanish-tinged Zamba and Candombe—a form of African dance and music that came to that country from Uruguay when a group of slaves arrived in the 16th century—are complex and formal and beautiful to dance at a Milonga and to merely enjoy the fascinating rhythm with the ears of the heart. Mr. Pavan blends these into the tradition of classical guitar repertoire like a master chef turning out something in a nouvelle vague kind of way. His “Three Suites for String Quartet” is startling. It sparkles with rhythmic extravagance and is harmonically an embarrassment of riches in which the guitar provokes the Quartet into weaving a magic spell as it moves through the three bracing movements. Violins and the viola exchange magnificent pizzicato and con arco playing with each other as the Suite devolves from the central theme into exquisite motifs and melismas as the music progresses through the “Whole Tone Scale Fantasy,” Contemporary Fugue” and the Octatonal Tango.”

Then the music gets even trickier. The “Nuevos Aires Folkloricos” uses the classical Aire to pluck from the sky, it would seem, a musical melding of soaring movements and meld these seamlessly with Argentinean folk forms—the Zamba, Chacarera and the Vals—in the three movements that course through the arterial system of the music via the graceful fingering on Mr. Pavan’s fret board. The guitarist applies such delicate pressure to the strings in some parts of the piece that it would appear that nothing but air and wind rushes through between his fingers and the strings causing them to rustle as if they vibrate with the hushed leaves on trees during spring. Here is where Mr. Pavan worships at the altar of originality while remaining true to his Argentinean roots, recalling the very best of his classical training as if he were in imitation of the great Cuban Leo Brouwer and the Brasilian, Carlos Barbosa-Lima. Again, the “Gigue a Jorge Morel,” a baroque piece of immense grandeur and beautiful noise from the sound and space of the guitar in tribute to possibly the greatest living classical guitarist of Argentina. The joie de vivre of the piece is palpable and so infectious that should the listener know of this dance it would sweep him or her off the feet.

It is throughout the album that Carlos Pavan shows his ingenuity as a composer who especially understands and uses colour brilliantly in his writing and arrangements. His deep feeling for timbral values of guitar and strings also contributes to the memorability of the album.

Carlos began his guitar training at the age of 12 and has since become one of the most diverse guitarists and composers for contemporary music (guitar , strings, wind, brass and chamber). Upon his graduation from the school of popular music, La Colmena (Argentina), he started teaching in private schools while traveling to Buenos Aires to study under Pino Marrone ( jazz guitar) . Carlos arrived to New York in 2000 to pursue musical studies & received a full, 2-year scholarship at The Collective , he has studied under Pat Martino ( jazz guitar), Dario Esquenazi (Paquito de Rivera),Thomas Milliotto (Brooklyn Conservatory classical guitar), Jesse Henserkiefken (conducting ), Jorge Morel (classical guitar/composition), among others… Read more…