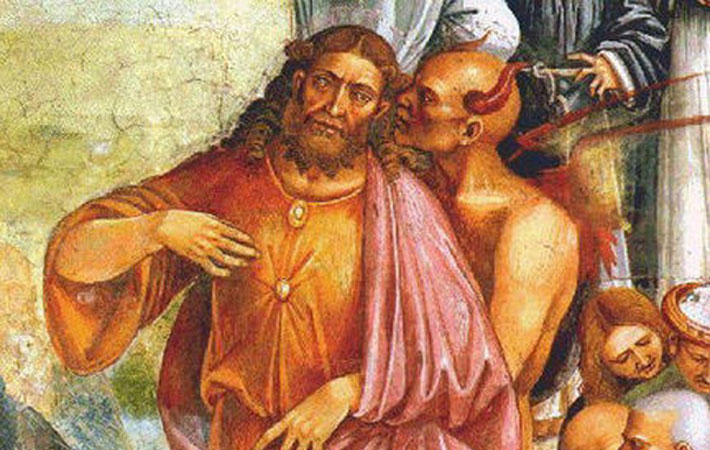 In the apocalyptic shout of St. John The Divine’s letters preceding his great, final book of the Bible, the Antichrist features prominently as a figure who will reign over the earth towards the end of the world, before the second coming of Jesus Christ the Messiah, who will defeat him. However, in the ages during his rule, the Antichrist will control, befuddle and overwhelm the earth and Christendom. Satan will whisper in his ear and the Antichrist will begin his game of throwing the world in disarray. This will be the unavoidable tragedy of the Antichrist. This 12th Century Latin text, Ludus de Antichristo was an early mystery play from the Quirinus Monastery at Tegernsee in Bavaria as was translated into German by the monks. Robert Moran musical adaptation is based on this text, whittled down to a spare 45 minutes or so, from the original four-and-some hours. This in itself is no mean achievement. 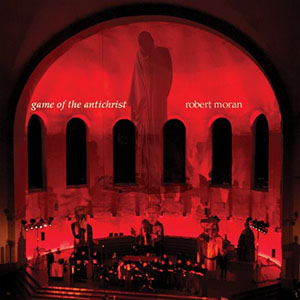 Soloists and instrumentalists continue to combine soon after a brief and ominous preface that sets the tone of the tumult that follows. Thus begins “The Game” referred to in the title, a monumental deception perpetrated upon the three principle groups in the drama—Christians led by the Pope, Jews led by a Rabbi both Diasporas representing monotheistic followers of God and the Babylonians led by their king, all of whom are a pagan people who bring to the dramaturgy, a pantheon of gods and goddesses. In broad terms, the “innocents” appear to be represented by a children’s choir, while the adult choir and soloists would probably stand for those believers and non-believers in maturation. All of these peoples are represented by voices ranging from sopranos and mezzo-sopranos to countertenors. Noticeably absent are basses and baritones. These voices are still present in the play, but their roles are assigned to bass trombone and tuba, while the organ, horns and timpani aptly characterise the presence of Pope, Rabbi and King.

The play is divided into five scenes, each mutually exclusive although one leads into the other. Salutary aspects of the play are established in Scene 1, where the three Diasporas are introduced as they arrive for their conclave. This ends with the children’s choir singing “Salve Domine,” a sublime hymn that begs the salvation of God. So beautiful is their singing that it seems as if the music suggests a melismatic plea wafting on the voices of angels to the skies in search of the God of Christians and Jews. This segues into the congregation breaking into a “A Violent Religious and Political Argument.” After the clamour that follows it is time for the heraldic sections of Scene 2: “The Angel of God Appears,” and after the grave judgement is swift and devastating and sung without accompaniment before the next section, “The Angel Vanishes,” precedes the main section and the start of Scene 3 “The Appearance of the Antichrist.” Here Mr. Moran employs a so-called “jazz piano,” which only perpetuates the myth that “jazz” is the music of the devil. This might be the only wrongful metaphor in the opera. The monumental “Sanguine Patrie” of Scene 5 and the hugely edifying portrayal of the defeat of the Antichrist, albeit from the Catholic point of view mark the best performances on the recording.

The absence of a printed libretto on the CD package is a mistake. Plays and operas on records and CDs must have that to enhance the involvement and enjoyment in the listening experience, but other than that this is a fine recording of an important musical endeavor.

Within a Day is a composition of ethereal beauty. It aims to dwell musically in the seemingly impenetrable dimension of the physics of the otherworld–neutrons and other sub-atomic particles. It is telling that both composer and performers acknowledge and employ interpretations of the ancient wisdom of Eastern civilizations, or at any rate, cultural beliefs and meditative practices. This is a splendid addition to the already valuable experience of this record.

Born in Denver, Colorado, January 8, l937. Studied 12 Tone Composition with Hans Erich Apostel in Vienna, l957-58; completed his Masters Degree in Composition with Luciano Berio and Darius Milhaud at Mills College, l96l-l963. 1963: Directly after completing his masters degree, he returned to Europe and worked with Berio at La Scala, Milano, then returned to Vienna; during the summer of l963, he signed contracts with Universal Edition, Vienna for various musical graphic works. In November l963 he returned to San Francisco where he taught Composition at the San Francisco Conservatory of Music; he also directed the San Francisco New Music Ensemble until Fall l972. In August 1969 Moran created his first city-work for the entire area of San Francisco, incorporating 100,000 performers, 2 radio stations, 1 tv station, 30 skyscrapers, 6 airplanes, dance ensembles in the streets, etc. Because of the success of this work, his second city-work, HALLELUJAH, was commissioned and premiere using 75,000 performers in the city of Bethlehem, Pennsylvania, April 1971… Read more…