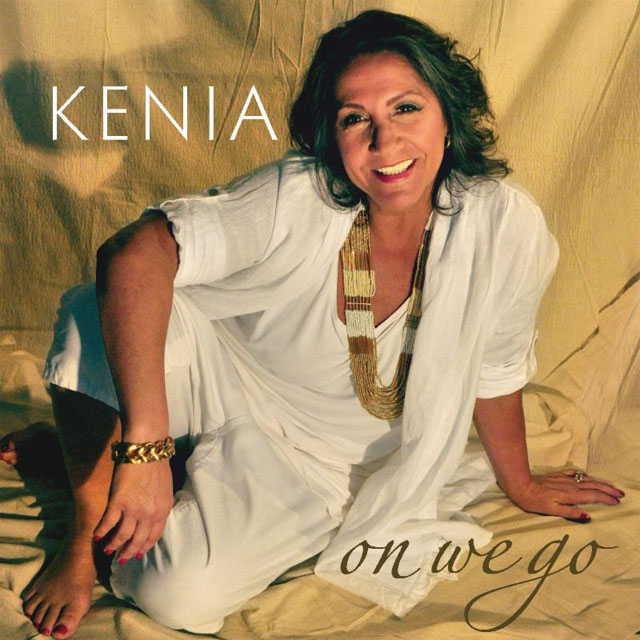 At its best Brasilian music is one of the most invigorating forms of music on the planet. And while most people know that, not might know that Kenia, a carioca who has settled in Philadelphia, Pa., is one of the most poetic of expressionists of the Brasilian idiom, always hitting you with its unique character and emotional depth in song, after song, after song. Her exquisite performance on the 2016 On We Go is a superb example of her vocal spectrum as well as her magical Brasilian soulfulness. It comes as much from vowel harmony as from vocal tone and that’s best demonstrated in the radiant, sun-drenched sambas as well as in works of deep ‘saudade’. Discoveries don’t come any better that Kenia’s vocals on each of these songs, exquisitely rendered with equal facility in Portuguese as well as in English.

It all boils down to a consummate understanding of the idiom and the sense of unfolding tapestry that occurs in the ambience of each cultural domain. The result is her rendition of “Summertime” which is fashioned from a personal sense of a spotlighted stage as well as a passionate understanding and context of Gershwin . And then there is “Pra Qu Que Inventaram a Bahia” (or “Why Did They Invent Bahia”), which is ripped from a soul infused with a rustic Bahian spirit, sashaying her way through a samba. Kenia can also sing a profoundly melancholic elegy and she does just that on “Closer To Me” with Hendrik Meurkens, another Brasilian soul, on harmonica. And just when you thought the proceedings could not get any livelier, Kenia whips into Romero Lubambo’s “ For Donato”, the great Brasilian guitarist’s tribute to another great Brasilian musician: João Donato.

This is not to suggest that Kenia has something for every mood or taste, in English or in Portuguese. However, it does illustrate her ability to bring joy and tears to an unsuspecting audience with a flawless understanding of the nuances of each language and its idiom. Not many Portuguese-speaking Brasilian performers can put that on their résumés. It is also hardly surprising that giants of contemporary Brasilian music such as Ivan Lins (“Closer To Me” and Illusion”), Antonio Adolfo (“Que Amor é Esse” and “Pretty World/”Sá Marina”), and Aloisio Aguiar (“ Coming Home”) would all gladly lend her a hand as she writes lyrics to their music.

Meanwhile no praise is high enough for the personnel on this disc: Lucas Ashby, Ago Piszlora, Paul Socolow, the dazzling Mark Soskin and an irreplaceable Adriano Santos. Nor should it surprise one that exquisite music by Eric Susoeff and Lorraine Feather (“On We Go”) should turn up becoming the curtain raiser on her recording, or that the breathtaking duet with yet another ingenious Brasilian musician – the guitarist, Sandro Albert – should end up bringing the curtain down on this recording. It is every bit of a masterpiece as you would expect from someone as sublimely talented a vocalist as Kenia.