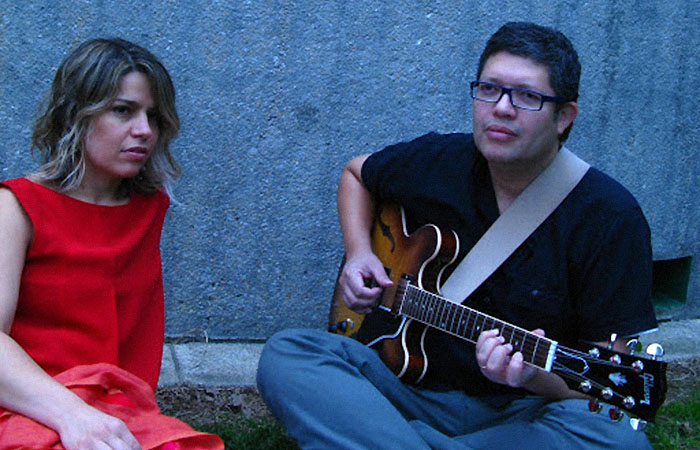 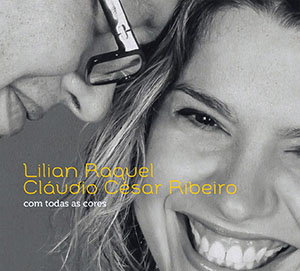 The absolutely sensuously voiced Lilian Raquel has brought forth another recording: Com Todas as Cores, which is exquisitely voiced and magnificently orchestrated by her trusty partner, the guitarist, composer and lyricist, Claudio César Ribéiro, a maestro in his own right. The two musicians work extremely well together; one complementing the other in ways that often include a secret look or a phrase played, which is a code to move in a particular direction or enunciated with an emotion that they both share in secret. Whatever it is that Claudio César Ribéiro does for Ms. Raquel, she responds with sometimes coy and blushing beauty and at other times with a little more—that aspect of her that brings out her sensuousness. Always singing within the range of her voice—a lyric mezzo-soprano—Ms. Raquel appears never to venture too far from a zone where she is most comfortable. But that is only half the story; in actual fact Ms. Raquel can venture much higher, but restrains herself, only to cut loose when the narrative demands it. She has that excellent sense of timing. It is no wonder then that grand masters of MPB, such as Ivan Lins—who has an exquisite turn on “Vitoriosa”—think highly of Ms. Raquel, as do Rosa Passos and Alceu Valença. To be admitted in to such vaunted company is a remarkable feat for the Brasilian-born, Portugal-based singer.

Having said that it is interesting to note how magically Ms. Raquel and Claudio César Ribéiro—more so the latter—are able to stay true to their Brasilian heritage, at least in the urban sense. In fact the music has a quite pure Carioca tinge to it. It is percussion-heavy and almost every song pays homage to the Brasilian rhythm-nation that exists under the skin of every carioca. There is plenty of superb percussion colouring by the clever drummers who have participated in the album. “A Épica” is a fine example of how the folk nature of the samba is woven into the musician’s performance. Listening to this chart brings back memories of some of the classic sambas that have appeared on the music of grand masters such as Chico Buarque. But there is something more to this music. Claudio César Ribéiro has very cleverly infused the music with the odd occasion when a cadenza or two announces the fact that improvisation is afoot. Here he has taken a play from out of the jazz playbook and this often makes the music more interesting as it enables musicians such as Claudio César Ribéiro himself, or the wonderful pianist, Andre Sarbib to stretch as well as to throw the vocalist a new challenge or two. This is brilliantly executed in the chart “Tristes Versos Vazios”.

By now, in the album, at least, it has become clear that the mastermind of the recording is Claudio César Ribéiro. The guitarist and bassist, plays a somewhat quieter role than he did on other, older projects. But the arranger and composer has deliberately dropped down his profile on this album, focussing on bringing out the beautiful musical colours that he has arranged for; bringing out the warmth and tender tones of the instrumentation, for here is where he is truly skilled. Besides letting Ms. Raquel front the music with her exquisite voice gives Claudio César Ribéiro the time he needed to focus on fluffing out the album as only he can: with brilliance that often leaves the listener breathless.

Lilian Raquel and Claudio César Ribéiro on the web: lilianraqueleclaudiocesarribeiro.com