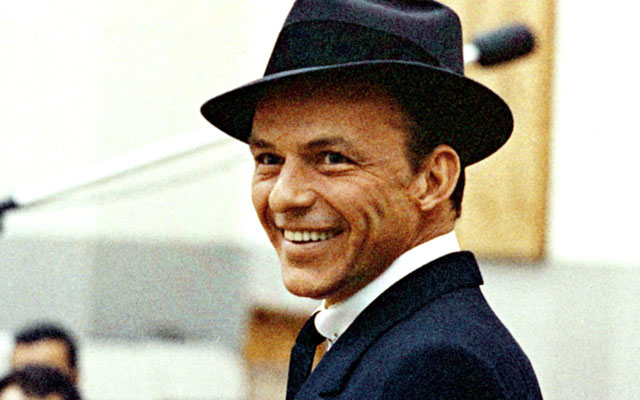 There is absolutely precedent for Frank Sinatra, to be represented in every part of the musical topography – from New York to Bogotá and San Juan. Mr. Sinatra, Ole Blue Eyes was, after all The Chairman of The Board, much like Benny Moré would have been for Afro-Cuban music… probably bigger. Who can forget how the great Antonio Carlos Jobim was persuaded by Claus Ogerman to make that fabled Francis Albert Sinatra & Antonio Carlos Jobim album on Sinatra’s own Reprise label (1967). Sadly this album or something like it could not have been made by Ole Blue Eyes in his lifetime. The album with Mr Jobim was to be Mr Sinatra’s only musical journey into the southern part of the continent.

So this album ¡Oye Frank! Sonata Latina Tribute Orchestra, a collection of the most celebrated Frank Sinatra songs sung by Billy Kent and in one case, Tina Aldana, will have to do it for now. Anyone looking to poo-poo the idea of Mr Sinatra’s golden oldies sung by another vocalist – and that too in another idiom – will soon have to eat their words. This is a superb album, full of sass and class. The vocalist Billy Kent is a velvet-voiced tenor whose phrasing certainly does justice to Frank Sinatra’s own phrasing. This is certainly not a clone of Mr Sinatra’s work, but a clever adaptation of it in the Latin idiom. Mr. Kent understands this and he stretches his lines in a masterly manner; just enough to sing with swagger and not seem to be too laid back (in order to capture Mr Sinatra’s own swing and swag).

The music, however, is only as good as its arranger, producer and musical director – not to mention the players who accompany the vocalist. As far as the former is concerned, the percussionist Filipe Saray must get all the possible credit. His adaptation of Mr Sinatra oeuvre to the Latin idiom is flawless. In order to realise this Mr Saray must not only transpose swing to clave, but must also turn the emotional drama of the Frank Sinatra originals to the unique and relative machismo of the Latin idiom. Oddly this would have been in keeping with the high jinks of the Rat Pack, of which Frank Sinatra was a charter member.

Frank Sinatra was also one of the most ingenious crooners of his era – of any era, for that matter – and the object of picking the repertoire would also be to represent these big band vocals at their very best. To this extent the producers have done some masterful work. Moreover, Mr Sinatra was an utter romantic and this is borne out not only because of the choice of music, but also because of Mr Kent’s wonderful vocalastics.

Another interesting aspect of the package is the DVD which has been produced at Flamita Studios, for the producers of this project. I couldn’t really come to terms with the karaoke bit but considering the fact that this record might very well become a great party hit, the karaoke part of the package would make sense. While this might drive sales upwards, artistically it might have made better sense to stop at putting the filming of the recording of the album on the DVD.

Track List: Theme From New York, New York; Come Fly With Me; I’ve Got You Under My Skin; Fly Me To The Moon; Something Stupid; Call Me Irresponsible; Strangers in the Night; The Way You Look Tonight; Summer Wind; My Way.

¡Oye Frank! Sonata Latina Tribute Orchestra opens up a whole new chapter in Frank Sinatra´s history, with the release of a very unique homage album. Just imagine some of his all-time classics blended with Latin rhythms such as salsa, mambo, cumbia, guaguancó and cha-cha… Welcome to the world of ¡Oye Frank! Read more…