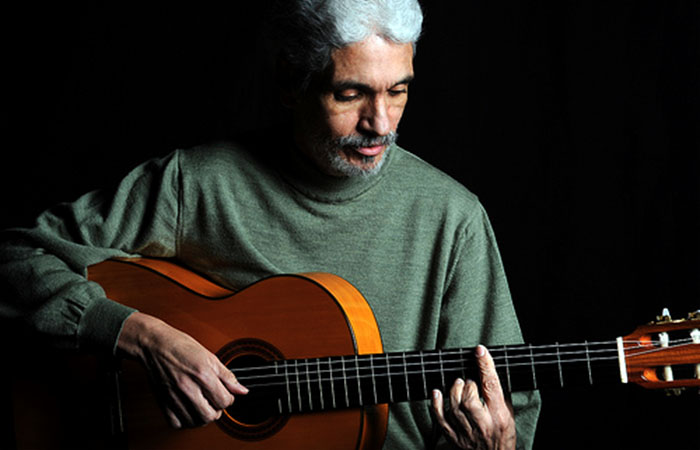 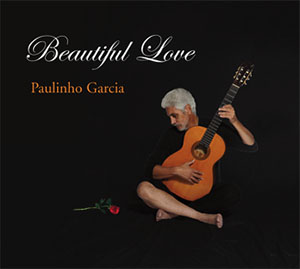 Visions of João Gilberto arise when listening to Paulinho Garcia’s remarkable recording, Beautiful Love. But there is an elemental difference. Mr. Gilberto sang with a tendency to whisper and wander charmingly off-key. Paulinho Garcia, on the other hand, has perfect pitch; sings with a charismatic English accent; phrases with something bordering on genius and plays a wonderful guitar. If he were playing a piano, that would bring images of Nat King Cole. The fact that Mr. Garcia plays guitar is reminiscent of the fact that the waters of Brasil seem to produce guitarists of incredible virtuosity and ingenuity as if they come from a secret well-spring at every turn—whether in the sertão or in cities in all corners of that great country. The other aspect of Brasilian nature is sensuousness. Singing of love thus comes naturally, but there is also the element of seduction that enters into the equation and Mr. Garcia is no exception. His sensuousness is legion and when in “I Wonder Whose Kissing Her Now” he sings of lips touching not only do visuals of the kiss beguile the listener, but it might be possible to feel the actual heat of the embrace and the subsequent meltdown.

The repertoire—songs about love and loss and longing—are a pre-eminent fit for a Brasilian, who feels saudades and alegria in short order. Paulinho Garcia is also eminently suited to sing about these emotions. Remarkably a recording that goes on for some fifteen songs does not feel boring for even a moment. This is probably because Mr. Garcia brings something new to each song. And his voice is so magnetic and the lyrics of the songs are so perfectly enunciated in his charmingly accented English that the listener becomes captivated by the song that comes alive with something akin to cinema-magic. Songs roll along like old black and white reels in a lonely cinema, which starts to fill up as rumour of the voice spreads like wildfire.

While the repertoire is near perfect from song to song, some songs simply stand out more than others. “When I Fall In Love” is sung and played in one of its more memorable versions. The elemental sadness and joy are beautifully expressed and there is something of a tentative, almost shy feeling on the part of the vocalist that makes this chart absolutely alluring. The melancholia of “Boulevard of Broken Dreams” is so perfectly sad that it almost has the emotions of a Spanish saeta. Toots Thielemans’ classic chart “Bluesette,” almost de rigueur on virtually every good Brasilian recording is re-imagined for just one sensuous voice and guitar. Lionel Bart’s “Where is Love” from the film Oliver begins with extreme pathos but then almost leaps into a joyful voyage of discovery.

Little was known about Paulinho Garcia before this recording, but on balance and on the evidence of this record from out of the blue it is a wonder where he was woodshedding. Now that the truth is out, much more will be happily expected of the singer and guitarist and it is almost assured that it will be something to look forward to.

Track List: Eu sei que vou te amor; When I fall in love; Like someone in love; Beautiful love; With every breath I take; Boulevard of broken dreams; Historia de un amor; I wonder who’s kissing her now; Bluesette; That old feeling; Do you remember me?; But beautiful; Where is love?; Casinha Pequenina.

Paulinho Garcia on the web: paulinhogarcia.com

Vocalist/guitarist Paulinho Garcia was born in Belo Horizonte, Brazil. His first contact with music came very early in life, when he started singing in a Sunday’s children program at Radio Inconfidencia in his hometown. In his teens he played first the drums and then moved to the bass, which became his main instrument until 1991 when he then switch to the guitar. Paulinho was well known in his hometown as a jingle composer, arranger and performer. He led the band “Os Agitadores” and was a bass player for the house band at Emissoras Associadas TV Itacolomi-Radio Guarani.

Paulinho moved to Chicago in 1979 and joined the group Made in Brazil until 1991 when he started his own band “Jazzmineiro” whose eponymous 1996 CD received excellent reviews in the Chicago Tribune, Jazziz magazine, the Brazilian Music Review, and The Brazilians.

Paulinho is a world-touring musician performing in renowned theaters, jazz festivals and clubs in Asia, Europe and America. His production “50 years of Bossa Nova” at the Chicago Millennium Park on July 24th 2008 alongside João Donato was seen by a record audience of 12000 people and in December of the same year he shared the famous Esplanade Hall stage in Singapore with Jeremy Monteiro and Toots Tielemans for a sold out audience of 1600 people. He performs regularly in many prestigious jazz festivals such as the North Sea jazz festival in Holland, Elite and Fujitsu jazz festivals in Japan, Singapore jazz festival, Jazz w museum and Jazz nad Odrq in Poland, Central Pennsylvania friends of jazz, North Beach and Sarasota jazz fest in the USA, the jazz cruise and jazz party at sea just to mention a few.

Paulinho is also a clinician and has given workshops and concerts at many prestigious universities such as Northwestern, Wisconsin at Milwaukee, Cornell, Hope College, etc. in 2009-2010 he taught in Russia at the Moscow College of Improvised Music and gave live workshops on TV for the whole Russian country. Paulinho presently teaches Brazilian guitar and vocals at Old Town School of folk music and coaches a Brazilian combo at Roosevelt University.