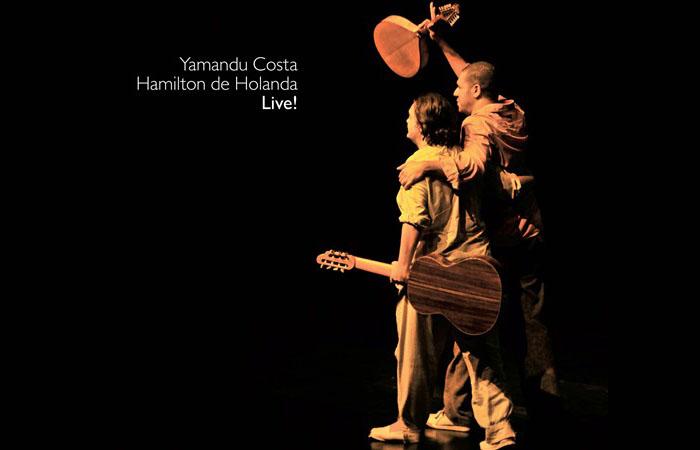 Hamilton de Holanda plays an instrument that might have seemed impossible to tame for generations. The mandolin, or bandolim as it is called in his native Brazil, has a knack of sounding dry. So taut are the strings and so small its body that notes die fairly rapidly after they are plucked or strummed. This is unlike the guitar (violão), which notes dally in the air around the instruments for precious moments after they are sounded. But De Holanda’s technique is so unique and advanced and his dynamics are so superior that he is able to let the notes of his music just that little bit longer so that they intertwine with those played by Costa. The result is a musical dialogue that is akin to the most beautifully expressed counterpoint performed by two stringed instruments. In fact sometimes it is impossible to tell the difference between the instruments—especially in charts such as the superb “01Byte 10 Strings” or Costa’s achingly beautiful “Samba for Rapha.” 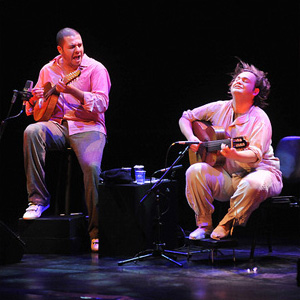 Yamandú Costa is another guitarist born into the great Brazilian tradition that includes players like Barbosa-Lima, Laurindo Almeida, Guinga, Gismonti, the three Assads (Sergio, Odair and Badi) and Marcus Tardelli. In fact Brazil has perhaps as many musicians who practice a modern wizardry on the violão as musicians did on piano in the era of the Romantics in 18th Century Europe. Costa does not always play fast. At his hand it seems unnecessary to do so. He can let his fingers fly in a rapid ascending arpeggio if the music calls for that. But he also extracts such pure emotions from the notes he plays, sometimes with such deep and ponderous dexterity that it appears that his violão is actually alive with every feeling and emotion that a human being is endowed with; all that Costa is doing is urging his instrument to speak its mind. His phrases are just long enough to make the emotional outburst come to life in the inner ear and when he desires to tell a story, as on “Whispered,” his music simply stirs the soul. Of course, he has a fine bedfellow in De Holanda who is often aroused by Costa’s playing and meets the magisterium of the violão with one of equal grandeur for the bandolim. This utter beauty is repeated on the encore for the program—Ernesto Nazareth’s “Sliding” or as the composer would have it, “Escorregando.”

This is a recording of exceeding beauty, one that will not be surpassed in a long time because it creates a new language for stringed instruments where voices are heard in all their splendour at the hands of sheer musical ingenuity.