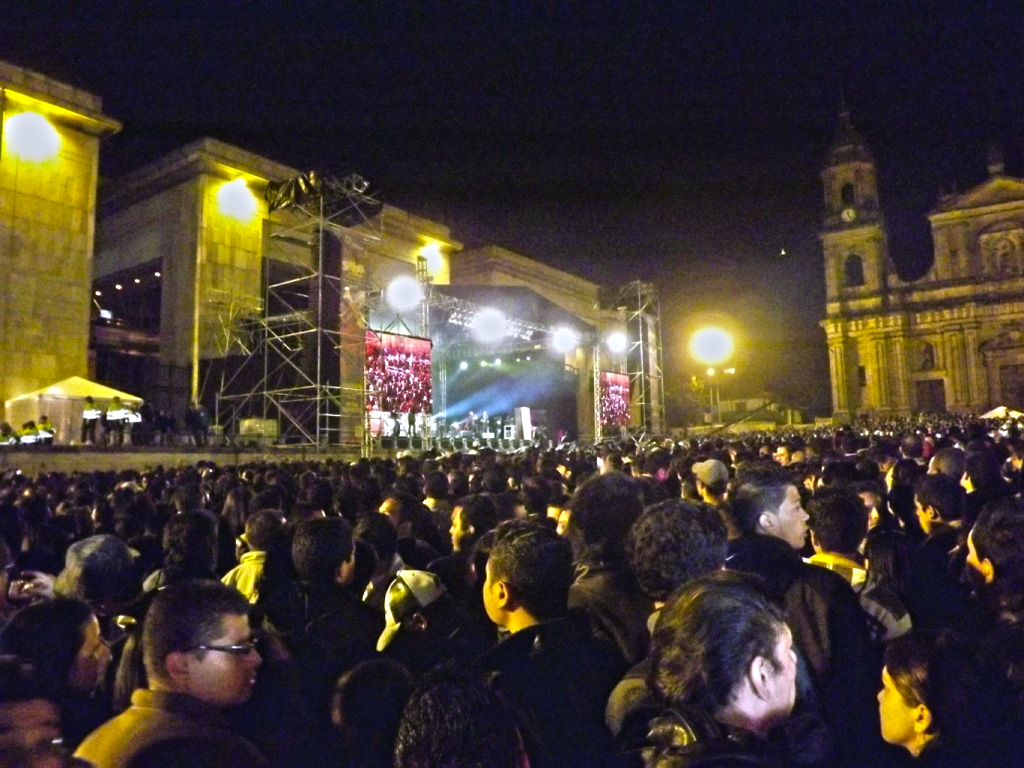 Last weekend Bogotá, the Colombian capital, celebrated another edition of Salsa al Parque, one of the biggest salsa festivals in Latin America. This is the fourteenth time the “capitalinos” enjoyed the great event of salsa rhythm.

Last weekend Bogotá, the Colombian capital, celebrated another edition of Salsa al Parque, one of the biggest salsa festivals in Latin America. This is the fourteenth time the “capitalinos” (people from Bogota) enjoyed the great event of salsa rhythm. In this opportunity the festival paid a tribute to Joe Arroyo, the greatest Colombian performer of Caribbean music who passed away last month after suffering from multiorgan failure.

On Friday, August 19th, at the Plaza de Bolívar, Salsa al Parque 2011 started the show with some of the winners of the Bogotá salsa band contest like Yoruba DC Orquestra, Deja Vu, and Enclave Latino. The weather was not the best for the beginning of the festival but this was not a barrier for salsa lovers to appreciate and enjoy the Caribbean rhythms of these local bands; the sounds of drums, trumpets and pianos were the tools to connect to the ancestral African music that any salsa fan has in his veins.

The first international artist that afternoon was the Puerto Rican Bobby Valentín, best known as “the King of Bass”, who started with a strong, rich salsa sound that made people forget their long work day. The sun set, and each “salsero” (salsa lover) sang with passion “Doña Bella” (Mrs. Beautiful), an unforgettable hit by Valentín.

The next artist was Rey Ruiz, the Cuban romantic singer who has been encouraging young people to love the salsa genre in different countries around the world. Mr. Ruiz transmitted energy to the audience and he proved this by his attitude when singing his hit “Fenomenal” (Phenomenal).  The night was a little cold and rainy but this seemed not to be an obstacle for people to stay in that big plaza among more than fourteen thousand people full of vitality to listen to lyrics and syncopated musical performances.

After Rey Ruiz, the Colombian band Calambuco came out to the stage in a particular and original way; the singer started the show with a soccer narration in which some of the players were public and political figures. The narration ended, and musical feelings and good sounds spread out over the spectators. 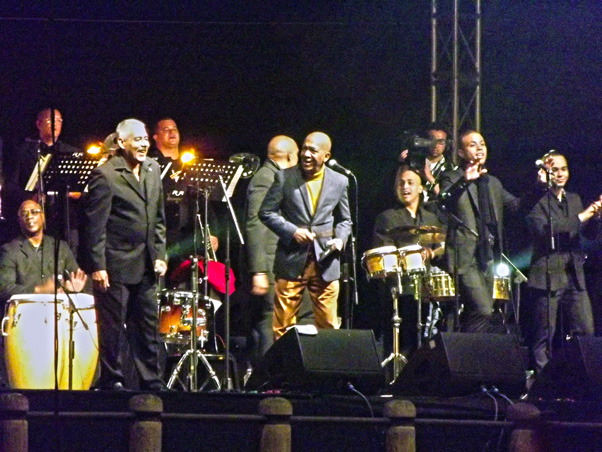 More than twenty minutes passed while the logistic team got the stage ready for the Fania legend Roberto Roena. Four elegant singers came out to explode with great voices followed by the director and dancer Mr. Roena, located just behind them to conduct the intro of the first song. Thousands of people danced to iconic salsa hits like “Marejada Felíz” (Happy Marejada) and “Cómo te hago entender” (How Do I Make You Understand?). In the middle of the concert Roena asked the audience to have a few minutes of silence to honour salsa legend Joe Arroyo. With his particular rough voice Roberto Roena said goodbye to this year’s edition of the festival leaving his heart with the spectators.

The last performance of this first day was the legendary salsa duet Richie Ray and Bobby Cruz who gave more than one hour of descarga and instrumental improvisation as is usual in their concerts. People sang hits together with Mr. Cruz like “Jala Jala” and “Sonido Bestial” (Wild Sound) while they danced passionately at midnight under Bogotá’s sky. The first night of Salsa al Parque ended with people cheering and standing ovations for this talented duet.

Due to the soccer world cup on Saturday, the second day of the festival was on Sunday, August 21st. On this day Bogotá salsa lovers enjoyed the musical melodies of other winners of the local band contest like Enclave 80, Pa’lo Alto Orquestra, and Guarango Salsa, three young and talented groups who turned the atmosphere on at the Cultural Centre La Media Torta. Later the audience was pleasantly surprised when eleven beautiful women came out to play charanga, the typical and catchy Cuban rhythm. Two violins, one flute, and even a xylophone were part of the instruments played by Santísima Charanga who made more than one man sigh and dance. 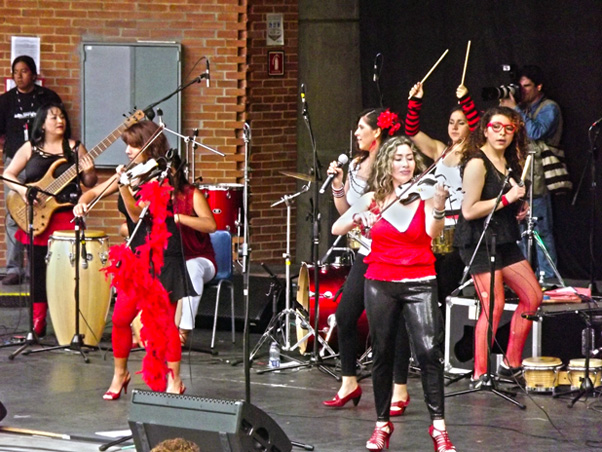 Continuing with the festival, next on stage was the Dutch musician Maité Hontelé from Medellín, where she currently lives. Mrs. Hontelé is an excellent trumpet player with a special feeling for Latin music which has resulted in her performing with the legendary Buena Vista Social Club. To Salsa al Parque Maité brought Cuban, Latin-jazz, bolero and popular Colombian songs.

Before the festival’s end, the salsa fans received with great applause the Purizaga Brothers, a committed Peruvian salsa band lead by Enrique (piano), Eddie (voice) and Jorge Purizaga(bass). Their strong and classical salsa sound caught people’s attention making them jump and shake their bodies. After the Purizaga Brothers said goodbye the spectators moved closer to the stage fence to wait for one of the most innovative and talented orquestras in Bogota, La-33.

The cultural centre was so crowded with spectators who arrived just to see La-33 who has toured in almost five continents around the world. Their sound is a mixture of bogaloo, mambo and other rhythms like funk. The people clapped and shouted the name of the group, waiting for that energy that La-33 transmits from the stage. Songs like “La 33” and “Pantera Mambo” (Mambo Panther) were sung aloud by each one of the spectators. This night had a reason to be special, not only to celebrate another edition of Salsa al Parque, but to celebrate ten years of La-33 making people fall in love with salsa music. 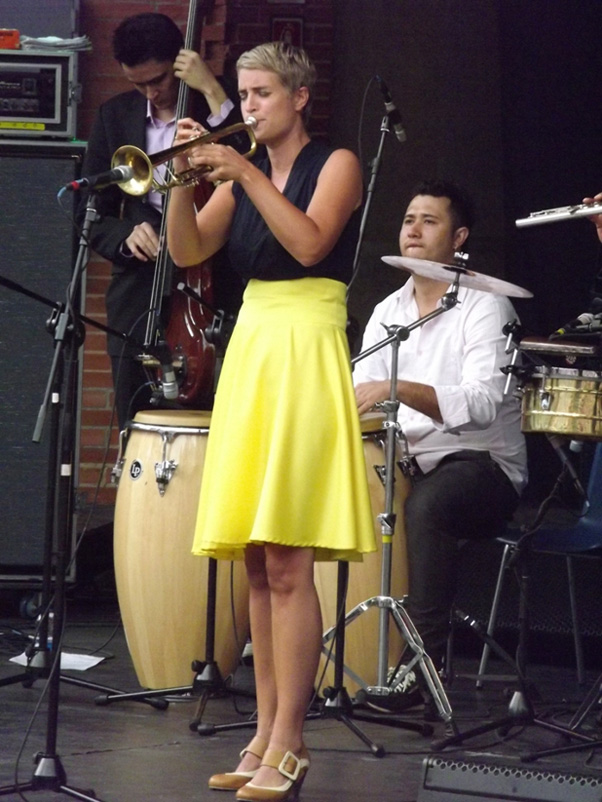 Opus 4 and Septófono Celebrating the art of singing in Colombia