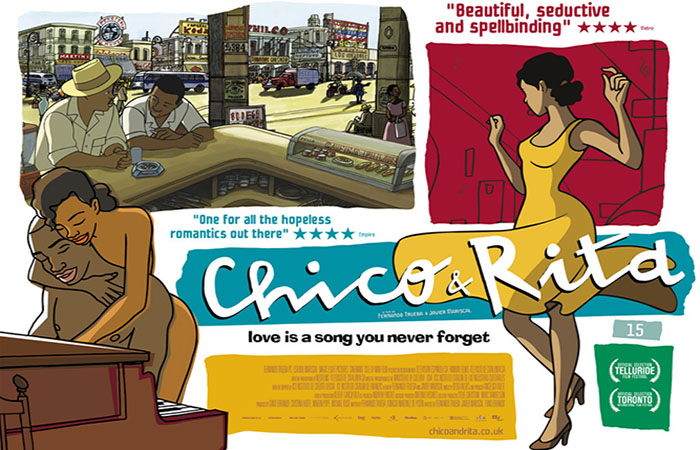 A seemingly ordinary, but tormented love story between a pianist and a singer, takes on a transcendent grandeur and sublimity through the eyes of Spanish filmmaker Fernando Trueba, and through the animated drawings of graphic artist Javier Mariscal. Inspired by one of the greatest Cuban musicians ever, the legendary Bebo Valdés, Chico & Rita is actually dedicated to him, his amazing life and his achievements.

Chico & Rita’s love story (written by Trueba along with Ignacio Martínez de Pisón) begins in La Habana of the late 40’s, and then jumps to New York, taking place during a magnificent era of artistic creation. It’s the time of be-bop, cubop, mambo, after-midnight jam sessions and arousing boleros. The fusion and exchange of musical ideas -which are at the core of the Jazz spirit- converge in the magical city that never sleeps.

Afro-Cuban Music and Jazz, a mixture concocted in heaven by the deities, is right at the center of the plot of Chico & Rita. It is also right at the heart and soul of Mr. Trueba, whose passionate affair with Cuban culture and Latin jazz music continues igniting his creativity.

Reminiscent of many classic movies, Chico & Rita flows like a Jazz arrangement, in and out of the main theme, briefly paraphrasing well-known pieces. Trueba thinks of the movie as a bolero, a love song converted in a compelling story. Through Fernando Trueba and Javier Mariscal this metaphorical figure takes on a delightful audio-visual dimension.

The animated recreation of the main characters in the movie is fascinating. And they are not only humans. The main cities where the movie takes place are characters of their own. Havana City and New York City get a magical, but very realistic treatment. There are short scenes in Paris, Beverly Hills and Las Vegas. If from a mere technical point of view Chico & Rita is a fascinating production, it is even more from an artistic point of view. For those interested in the technical intricacies of how this movie was created, visit http://www.hobsoft.net/cases/chico.

Director Fernando Trueba explained his concept and how he realized the movie, which was actually shot with real actors in San Juan de los Baños, Cuba. He wanted to capture the true human movements, the lighting and all the real elements that would show the illustrators a vivid visual of his idea. The participation of graphic and visual artists from different countries made Chico & Rita an international endeavour.

Jazz aficionados are in for a treat. Old standards get infused with new life and the sound is imposing, reminiscent of a bygone era, but with modern and hip arrangements. Cameos of musical heroes abound: Guillermo Barreto, Nat King Cole, Charlie Parker, Thelonius Monk, Dizzy Gillespie, Tito Puente, Miguelito Valdés, Chano Pozo, who actually plays a role -short but powerful- in the movie. The tragic demise of the Master Cuban Rumbero is seen in detail, being shot to death in a bar, while “Manteca” plays in a jukebox. Throughout the movie, we can hear the distinctive piano playing of Bebo Valdés, who once again collaborated with Trueba. Valdés was in charge of the soundtrack of the movie and directed a superb big band conformed by some of the best musicians from Cuba and New York. At the ripe age of 92, Bebo Valdés continues to amaze. Chico & Rita also features the music of Dizzy Gillespie, Cole Porter and Thelonius Monk.

Fernando Trueba gave us Calle 54, a musical-documentary that pays homage to some of the best Latin jazz creators. Calle 54 evolved into a Jazz club in Madrid, and a recording company, Calle 54 Records, which has released a series of award-winning productions. Now we get Chico & Rita, and according to Javier Mariscal, a comic book series following the saga of Chico & Rita is in the making.

Sete Corações—Mestres do Frevo: When Music Becomes a Matter of the Heart