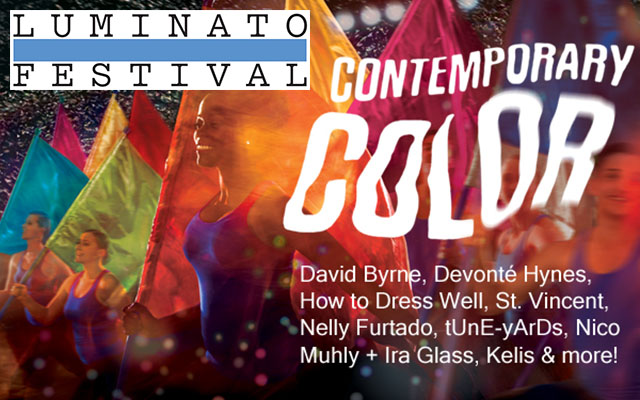 Toronto, ON– The 9th annual Luminato Festival of Arts and Creativity is set to create adventurous art and ideas in adventurous places from June 19 to 28 with a celebratory, 10-day multi-arts schedule that reimagines Toronto and the way we experience it. This June, local, national and international artists, from one to 1,000, animate the city with music, theatre, dance, visual arts, literature, film, food, and more.

Alongside two previously announced major projects, R. Murray Schafer’s epic oratorio Apocalypsis (June 26 to 28) and David Byrne’s arena-scale spectacle, Contemporary Color (June 22 to 23), Luminato Festival announced a full slate of programming details for 2015 with a focus on projects and artists celebrating the cultural richness of the Americas in a salute to the Pan Am and Parapan Am Games being held in Toronto this summer.

JUNE 20-28
New Canadian Music Series
Enjoy a daily showcase of the brightest Canadian talent, live at the Festival Garden Stage from June 20 to June 28. Come down after work, grab a drink and a bite to eat and get to know Canada’s next generation of up-and-coming musicians.

JUNE 22
Music of Mexico
Distrito Federal Chilango Power Ska Punk meets Chiapas Mexico Message Music
Quique Escamilla: Modern-day troubadour Quique Escamilla is a multi-instrumentalist, singer-songwriter and producer living in Toronto. Since his arrival in 2007, he has rapidly become a rising star on the Canadian music scene…
Los de Abajo: As distinctive as ever, this band from Mexico City has built a distinctive fusion of regional music and was championed early on by David Byrne, who signed them to his label Luaka Bop. Since then, the band has won a BBC award…

JUNE 25
Caribbean Calypso
A musical exploration of coastal Caribbean Garifuna culture and Trinidadian Roots Reggae Calypso
Kobo Town: Founded by Trinidadian/Canadian songwriter Drew Gonsalves, Kobo Town is named after the historic neighbourhood in Port-of-Spain where calypso was born. Their 21st century interpretation of classic Caribbean music mixes calypso, reggae and acoustic instrumentation with innovative production, social commentary and an indie rock attitude.
Aurelio Martinez: Honduran artist Aurelio is as much a musician as he is a cultural ambassador for Honduras’ coastal Garifuna people. Performing in his native tongue, Aurelio’s sound is an interesting blend of traditional music fused with Latin rhythms. A prodigy of percussion, Aurelio played professionally with Latin ensembles before founding his own Garifuna ensemble, Lita Ariran…

JUNE 25
Festival Cabaret Series: Joey Arias—A Centennial Tribute to Billie Holiday
For the first time ever, Luminato Festival brings to the stage the Festival Cabaret Series: a delightful and disarming meld of performance art, theatre, music and play. Dubbed “a demigod of the demimonde” by Time Out, Arias has been revered since the 1980s as a central figure in New York City’s fertile downtown performance scene...

JUNE 26
Ecuador Meets East LA
America Mezcla—Los Angeles Son Jarocho meets New York’s female Carlos Santana
Eljuri: Fusing socially conscious lyrics with blistering guitar rock, Ecuadorian guitarist Cecilia Villar Eljuri has been compared by the likes of the New Yorker to Carlos Santana. Sensitive and committed, of Latin blood and heart, composer and lyricist, leader of all the projects in which she has been involved, Eljuri has toured in Mexico extensively…
Las Cafeteras: Las Cafeteras create a vibrant musical fusion with a unique East LA sound and a community-focused political message. The band formed in 2005 with the purpose of documenting the histories of their neighbourhoods through music, telling stories of love and fights for justice in the concrete jungle of Los Angeles. By sharing these stories, Las Cafeteras strive to make their Son Jarocho-inspired music relevant…

JUNE 26-28
Apocalypsis – 1000 performers. 1 epic experience.
Produced by Luminato Festival
Acclaimed Canadian composer R. Murray Schafer’s Apocalypsis brings Toronto to life, then to death, then to life again under the direction of Lemi Ponifasio. Performed in full for the first time since its world premiere in 1980, Schafer’s epic musical voyage is written in two parts: John’s Vision, a meditation on the world ending in chaos; and Credo, a revolutionary ascension to order.

In one of the largest performance events Toronto has ever seen, Apocalypsis blends professional and amateur talents in a cast of 1,000 local singes, musicians, conductors, actors and dancers to create an unprecedented feast for the eyes, the ears and the soul.

JUNE 27
Brazilian Block Party
A fun family event featuring day-long animation by strolling artists, craft-making workshops and irresistible food!
Celebrate the Brazilian tradition of festive gathering at an all-day public Brazilian Block Party with food, drink, music and dance. Whether Carnaval, São, João, or any one of the myriad of the country’s festivals, outdoor daytime street parties are a beloved part of the Brazilian cultural landscape. The Festival Hub’s Block Party, curated by Uma Nota Culture, presents not just a series of programs, but a carnival of active cultural jamming. Step out of the ordinary and connect with your fellow Torontonians as you dance the forró or samba, sample treats like feijoada, and swing to a set of talented DJs and musical acts: Flávia Nascimento, Mundo Livre S/A.

JUNE 28
TSO Free Outdoor Concert: A Symphonic Zoo
In what has become a beloved Luminato Festival tradition, the full forces of the Toronto Symphony Orchestra, conducted by TSO Music Director Peter Oundjian, perform a free outdoor concert at the Festival Hub. Bring the entire family (even pets!) for an afternoon of fun as Luminato Festival wraps in grand style, filling the Festival Hub’s Garden of Light with music inspired by animals. The TSO’s RBC Resident Conductor Earl Lee joins Music Director Peter Oundjian in A Symphonic Zoo, featuring selections from Tchaikovsky’s Swan Lake and Stravinsky’s Firebird, Rimsky-Korsakov’s Flight of the Bumblebee, Prokofiev’s Peter and the Wolf, the Bulldog from Elgar’s Enigma Variations and the Mule from Grofe’s Grand Canyon Suite.