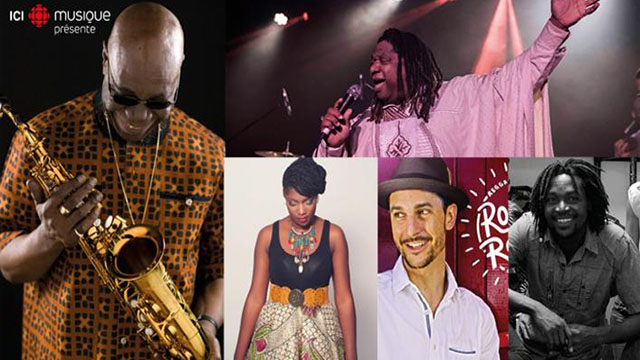 The “GRANDS ÉVÉNEMENTS” (Great Events) series, presented by ICI Musique, welcomes the top stars of world music. It gathers artists who have left a significant mark on world music history and no longer need presenting, with their fame on the international stage.

Manu Dibango meets the new generation on July 18, at the Théâtre Fairmount. The father of world music passes the torch to Montréal’s new artistic generation. On stage, artist-ambassadors Veeby, Élété and Rookie Rook will perform new world music sounds and will pay tribute to him. Manu Dibango will be the guest of the Syli d’Or 2016 grand prize winner, the Cuban group Proyecto Iré. A unique evening event reflecting this 30th anniversary!

The “RÉVÉLATIONS” series features the new ambassadors of world music. Talented artists, among the most promising, are coming from the four corners of the world to present the effervescence and new colours of world music.

The “PRESTIGE” series at the Gesù is imbued with charm and elegance. In a special place, the audience is conveyed to a genteel world to experience magical moments, where emotion rubs shoulders with grace.

The “URBAN AFRICA” presented by series is dedicated to deconstructing myths associated with this far-away continent. Blended pop and percussive hip hop showing these artists’ ability to appropriate the beats Africa has inspired, with flair and personality!

The “NUITS D’AFRIQUE SOUND SYSTEM” series, presented by CISM, will be taking over the Sala Rossa. It shows just how much world music is an infinite source of creation. It forms the Montréal hub of world 2.0.

The “ÉTOILES NUITS D’AFRIQUE” (Stars of Nuits d’Afrique) series is the night-time concert get-together at the Club Balattou starting at 11 p.m. Nine events, each one-of-a-kind, centred around three host artists and their guests. Exclusive gatherings, a blending of cultures. Free concerts for all festival-goers holding a ticket to a Nuits d’Afrique show.

Three decades, three Stars! On the occasion of its 30th anniversary, the Festival offers a third series of Stars, to be celebrated well into the night!

“VOIX DU MONDE” (Voices of the World) series, at the Club Balattou In solo, duet or trio performances, their voices are the instrument of their art. Extraordinary voices for an original series!

Rendez-vous Mandingue with Adama Daou and special guests (West Africa / Québec), on July 16 at the Théâtre Fairmount – The full power of Mandinka identity will explode on stage in a fireworks of energetic drums, hypnotizing instruments, frenetic dances and ancestral costumes, led by storyteller, percussionist and balafon player Adama Daou.