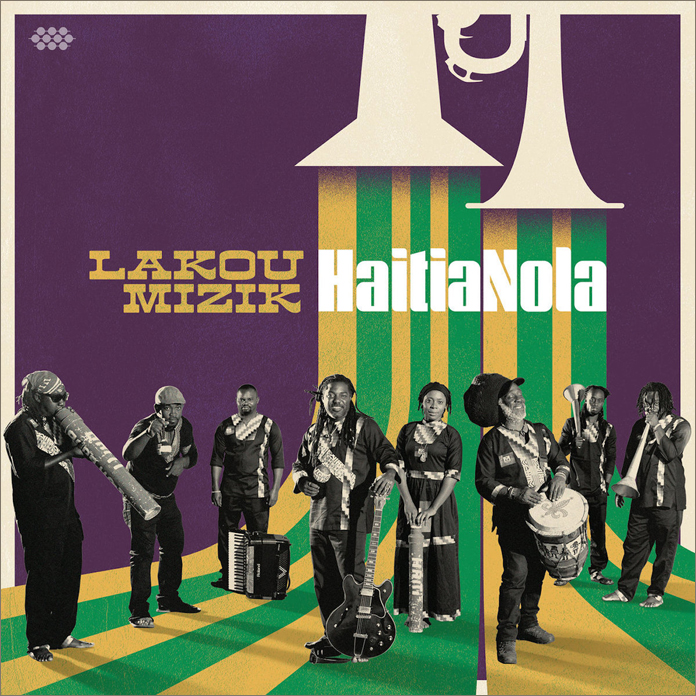 Haiti and New Orleans have an extremely deep cultural connection which, in turn, arises from its historical one. Both places saw an infusion of “freedom” when African slaves revolted against the Spanish and French. But it was the Revolution of Saint-Domingue (Haiti) led by Toussaint L’Ouverture that began in 1791 and ended with liberation in 1804 that spurred a new wave of the African Diaspora lapping at the shores of islands Cuba and other Caribbean Islands, and up river in New Orleans as well. So it’s no surprise that the music of Afri-European cultural topography of Haiti is inextricably linked to that of New Orleans, Cuba and elsewhere in the region.

What we knew to be African-American music not only came first from one source – Africa – but was further re-imagined (for want of a better word) all at once (albeit with some dialectical differences) – again, almost at once – in each of the regions touched by the wave of African men and women newly freed by the Haitian Revolution who used the opportunity to travel abroad.

With this background in mind, Haitianola ought to be viewed as a big celebration of that early collision music between Haiti and New Orleans – the cultures of both regions springing from the “Mother” of all civilisations and cultures: the one that sprung into being in Africa. That this celebration is like no other, of course, has everything to do with the participants on this magnificent recording. The word “magnificence” hardly begins to capture the musical experience (one word simply cannot do the recording justice).

There is a sense of visceral excitement and unbridled energy, of unfettered joy and an almost uncontrollable explosion of melodic invention, harmonic colour and rhythmic flamboyance that seems not to exist anywhere – unless, of course, it has an African music inflection. Drums do not simply speak; they sing. Indeed this act of finger and palm on the skin of the drum; this thunderous percussion colouring is the new palimpsest that traces its origins to a much older one when communicating, both with and without the spoken word, developed into the griot’s art of telling epic stories.

But more than anything else, we have a group of musicians from both Haiti and New Orleans (and elsewhere in the US) getting together to celebrate life in all its human glory. And it is this aspect of the music exactly that makes Haitianola so special. Listeners will not have to wait to dance to familiar music – the iconic piece “Iko Kreyòl” comes seven tracks deep into the recording; and even if you find yourself unfamiliar with the lyrics, which are sung in (Haitian) Creole, you will find yourself singing along with at least the two words of the title. This singing-along is, after all, what makes the aspect of communal music a part of every culture known to man. But the aspect of this “Haitianolan” celebration is utterly unique.

It’s the reason why Trombone Shorty, for instance, can “be on the same page” with the members of Lakou Mizik almost instinctively on “Pistach Griye”, or why it seems so easy for the inimitable Leyla McCalla and Daniel Tremblay and the Michots’ to fit so snuggly into the gliding music of “Grann”. And it’s also why the mighty Preservation Hall Jazz Band with its great musicians and those of The Soul Rebels positively ignite “Renmen”, “Iko Kreyòl”, and “Manman Lavi” and “Bouyon Lakou” respectively. And who can pass on “Sa Na Kenbe” with the velvet voice of Cyrille Neville, or the Holy Rollin’ voice of Tarriona “Tank” Bell, the 79ers Gang, or the many other guests who make this recording truly special?

Make no mistake, however, the power for the musical machinations comes from the incomparable musicians of Lakou Mizik: from the heartfelt emotions of the lead vocalists – featuring Louis Lasly Marcelin, Steeve Valcourt, Jonas Attis, Nadine Remy, Saïda Bellamour and Samuel Priviose – who make this music come alive as never before. They are nobly assisted by the thunderous ensemble of rhythmists – bassist Junior Lamarre, drummers Paterson Joseph and James Carrier (the latter two who, when playing, recall especially the mighty sabar drummers of Senegal often heard on Youssou N’Dou’s music) – and by Beniste Belony, whose feather-light touch on the keyboard and buttons and wheezing bellows of the accordion is redolent of the levity of life in Haiti and New Orleans. These and the other guests are the bedrock of this musical experience.

Nothing would, of course, be the same without the pivotal role of producer, engineer and musician-who-seems-to-be-everywhere on this recording, Eric Heigle. His artistic vision and musicianship is one of the principal drivers of this production, one to which each and every musician responds to with consummate artistry. It also seems as if none of this would ever see the light of day without Zach Niles and the peripatetic musical visionary Jacob Edgar founder of Cumbancha, all of which makes this an album to die for.